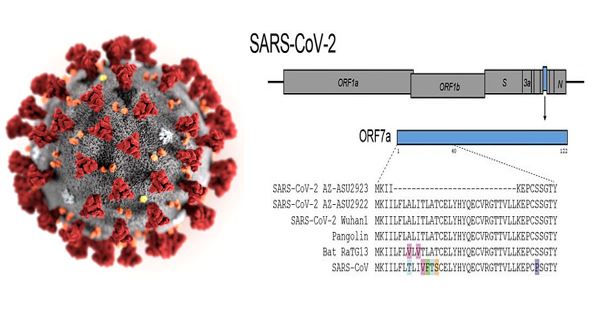 A silver lining for the world suffering from corona has come from the virus itself. Scientists in Arizona, USA, have detected unique mutations and genetic patterns in Corona’s SARS-CoV-2 virus that were observed 17 years ago at the time of infection with the SARS virus. This mutation is the disappearance of a large part of the virus protein, its genetic material.

Scientists are very excited because when this dying pattern was seen in the SARS virus, the infection was eradicated during its 5 months. That is why scientists believe that this signal of this coronavirus can cause its weakness.

During the research, researchers study the structure of viruses with the help of mathematical network algorithms.

Some mutations in the virus go against humans, some are actually beneficial humans – and researchers at Arizona State University says that the mutations we discovered are actually in human interest a unique change.

Researchers conducted their experiments by sequencing the genome of viruses found in 382 samples of nasal swabs. This is called gene sequencing. Like humans, the genetic material of the virus is made up of the smallest chemical units called letters.

To understand it easily, our DNA is the main genetic material in humans and there are about 3 billion DNA letters in the body. Similarly, coronaviruses have genetic material RNA proteins and a virus has about 30,000 RNA letters.

When scientists at Arizona State University were studying 382 samples, they found 81 letters missing in a virus sample. The head of this research Dr Iframe Lim said that this is something we saw during the SARS virus infection in 2003 17 years ago. Even at that time when the virus was weakening the large parts of its protein structure started disappearing.

Dr Lim says that this weak form of coronavirus is good because it shows the virus’s ability to decrease over time. Weak viruses can also prove to be very useful in the direction of vaccine production.

A similar mutation was observed in its virus 17 years ago during the infection of SARS virus between February 2003 to July 2003. During that time the epidemic spread suddenly in Asia and then weakened in five months. In 2003 the cases gradually subsided and it was assumed that the mutation caused the virus to weaken. In the case of Corona, this also appears to be the first ray of hope because this virus is very similar to SARS.

The weakness of the virus also suggests that it is an immune protein which means that it fights with the antiviral response of the patient and now that such a response has been done in a sample of SARS-CoV-2, it can be understood that the virus may be weaker and less infectious.