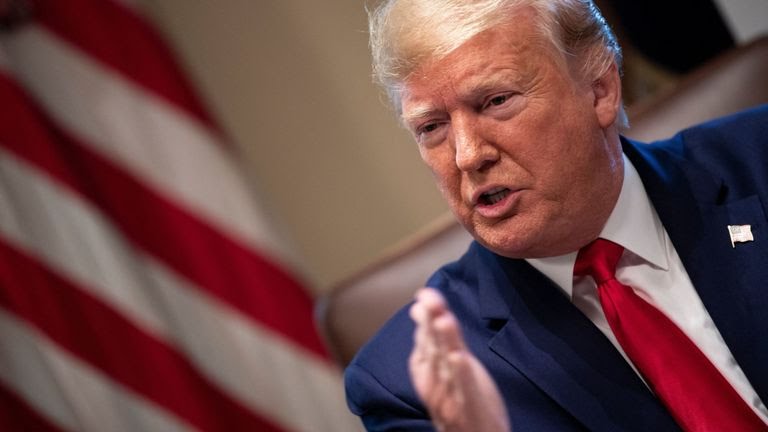 Donald Trump said Monday he is “strongly” considering accepting a challenge from opposition Democrats to testify in his own impeachment investigation.

After the speaker of the lower house, Nancy Pelosi, upped the ante by suggesting that Trump come forward to tell the “truth,” the Republican president said he was keen.

Pelosi suggested “that I testify about the phony Impeachment Witch Hunt. She also said I could do it in writing,” Trump tweeted.

“Even though I did nothing wrong, and don’t like giving credibility to this No Due Process Hoax, I like the idea & will, in order to get Congress focused again, strongly consider it!”

It was unclear what kind of testimony the president had in mind.

His defense team would likely be highly resistant to the idea of him appearing before the House Intelligence Committee delving into the allegation that Trump pressured Ukraine to dig up dirt on a political rival to help his 2020 reelection chances.

During the lengthy probe led by special prosecutor Robert Mueller into accusations that Trump worked with Russians to boost his 2016 election chances, the president refused a face-to-face meeting and instead answered questions in written form.

Even so, his lawyers negotiated strict limits on what kind of questions could be put. In dozens of instances, Trump then said he could not “recall” the facts.

The Mueller report ultimately found that Russian agents sought to influence the US election but that there was no evidence of collusion with the Trump campaign.

Any testimony by Trump would potentially be risky and his tweet could be nothing more than a tactical move in the tussle with Pelosi’s Democrats.

However, president testifying would not be unprecedented.

During his 1998 impeachment saga, president Bill Clinton, a Democrat, testified before a federal grand jury for four hours by video link. He then answered 81 written questions from the House Judiciary Committee.

Clinton was ultimately impeached in the House but acquited in the Senate.

Trump has become increasingly angry and frustrated over the impeachment process, which he insists is a “witch hunt.” Democrats say they are steadily revealing corruption and abuse of office at the heart of the real estate magnate’s presidency.

This week will see another stream of witnesses come before the Intelligence Committee, where they face questions from Democrats and Republicans.

Although the action is happening at the other end of Pennsylvania Avenue from the White House, Trump watches closely — so closely that on Friday he tweeted an attack on one witness as she testified.

Former Ukraine ambassador Marie Yovanovitch was telling lawmakers how she had been forced out of her post in oddly abrupt circumstances around the time of the alleged Trump scheme in the ex-Soviet republic.

This caused widespread consternation in the hearing room and Yovanovitch called the president’s intervention “very intimidating.”

Trump and his supporters have argued that the allegations against him so far are not supported by first hand witnesses. That will change, however, on Wednesday when the US ambassador to the European Union, Gordon Sondland, takes questions.

Sondland was in direct contact with Trump during the time when he was meeting with Ukrainian officials, allegedly as a key player in efforts by a small group of Trump confidants to push for the dirt on Democratic presidential candidate Joe Biden.

The House, where Democrats hold a majority, is expected to impeach Trump, although Republicans will likely vote solidly against. A trial would then be scheduled in the Senate where the Republican majority is expected to toss out the case.

However, Trump, in this case, would still be only the third president ever impeached and the fight is likely to have unpredictable fallout in the 2020 election.

A poll released Monday confirmed that the country is split more or less down the middle on whether Trump should be removed from office.

Fifty-one percent of those asked said they think Trump should be tried and convicted in the US Senate, while another six percent favor impeachment but not removal, according to the ABC News-Ipsos poll.