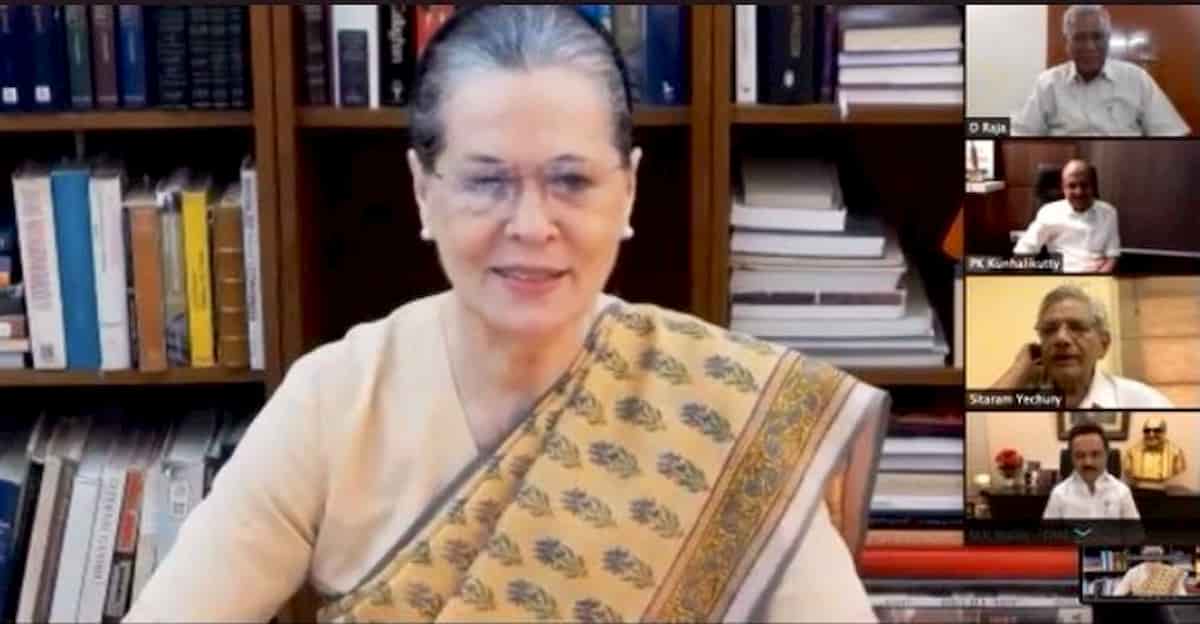 Congress president Sonia Gandhi chaired an opposition party meet to deliberate on the COVID-19 pandemic, migrants’ issue and the economic package announced by the Modi government.

The meeting was held via video conferencing. Leaders from 22 like minded Political Parties were present in the meet. The meeting started by paying homage to the victims, who lost their lives due to Cyclone Amphan in Bengal and Odisha.

In her address, Sonia Gandhi hit out at the economic policies of the central government. She pointed out the demonetisation and other policies of the central government which have led to catastrophic decline of Indian economy. She added that the initial promise of PM Modi about the war against corona to end in 21 days has misfired. While the entire country stood with the government, on the lockdown announced at a short four-hour notice, including the opposition parties. Still the government is not sure of the way to handle the country during lockdown and is lacking a foolproof exit strategy.

She also questioned the testing strategy of government and said that the government’s response to lockdown has held very diminishing returns. Rs. 20 lakh crore package has turned out to be a cruel joke to common people of India, she added. She also attacked the government on migrant’s issue and the weakest 13 Crore people of the country

Sonia Gandhi has been addressing CM‘s of her party and other key leaders since the outbreak of the pandemic. This is the first time during the lockdown that an opposition meet has taken place.

Among the oppositing parties, BSP supremo Mayawati, Samajwadi Party President Akhilesh Yadav and AAP Chief Arvind Kejriwal didn’t join the meeting. Mayawati has been targeting both Congress and BJP over the migrant’s issue in her state.