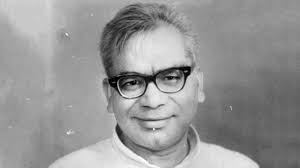 Twenty third March is the birth anniversary of Dr. Ram Manohar Lohia. In the events organized to mark this occasion demands are often made to the government for posthumous conferment of India’s highest civilian honour i.e. Bharat Ratna on Dr. Lohia. I anticipate that this year would be no different. In a brief commentary I authored in May 2018 a reference was made in it about this trend when Bihar Chief Minister Nitish Kumar placed this demand before President Ram Nath Kovind in a program in which the President delivered Lohia memorial lecture in a private university. Only three comrades Raj kishore (late), Qurban Ali and Pushkaraj affirmed my opinion expressed in that comment: it would be an injustice to Lohia and his legacy if the government/ruling class would confer Bharat Ratna on Lohia. In the present comment written on Lohia’s 111th Jayanti, I would like to submit the following reasons in support of my opinion.

First: Lohia was a strong advocate of rights and civil liberties and he considered civil liberties/rights as the foundation for fostering and strengthening democracy in the country and the world. He had this belief about civil liberties/rights from the very beginning of his political life. At the same time, the issue of civil liberties/rights for him was not merely theoretical; much of his political activism was spent in holding/joining protest movements related to civil and democratic rights/demands of common people, and in going to jail. Lohia was the more incarcerated in independent India in comparison to subjugated India. It was but natural that the colonial government would make false accusations on a freedom conscious person like Lohia and torture him to the maximum extent in jails, but even the top leaders of the government of independent India, police and courts showed no restraint in making false, baseless allegations/cases and displaying indecent behaviour against Lohia.

He was arrested more than 25 times, including the freedom movement, the Goa Liberation Movement, the Democratic Movement of Nepal. In 1964, during his visit to America, he was arrested by the police for protesting against racial discrimination at public places. Prof. Chandan Gowda has given a sincere analysis of the incident in his comment ‘An Episode in Civil Disobedience’ (Bangalore Mirror, 11 April 2016). For Lohia, the meaning of freedom of the individual was not limited to the personal freedom of any leader or activist. His goal was to make the value of individual freedom meaningful at the level of the whole of humanity. He considered freedom from colonial slavery as the democratic right of every Indian. Lohia was lodged in Lahore Fort Jail after his arrest during the Quit India Movement. The British government allowed him to be released on parole to attend the funeral of his father. He did not accept release on parole because as an Indian and a human being he considered his arrest and punishment unjustifiable. His father’s funeral took place in his absence. Lohia was the only child of his parents.

Lohia wrote a pamphlet titled ‘The Concept of Civil Liberties’ for the Indian Civil Liberties Union (ICLU), established by the Congress in 1936, headed by Rabindranath Tagore and acting president Sarojini Naidu. Dr. Kamal Nayan Choubey has delineated the content of this important pamphlet in his article ‘Nagrik Swatantrta, Rajya-Daman Aur Dr. Lohia’(‘Yuva Samvad’, Lohia Visheshank, March 2011). However, after independence, the Congress itself was not committed to the expectations and pledges mentioned in that pamphlet. Lohia was adamant during Gandhi’s struggle for independence and in independent India to Gandhi’s designated non-violent practice (civil disobedience) and accepted it as the greatest revolution of human civilization ever. Only during Quit India Movement or August Revolution he (along with Jayaprakash Narayan) make little improvisation to this policy.

It was not Lohia’s way to become democratic by keeping the option of violence in reserve. He also accepted no alternative to transparency in a peaceful resistance. His idea of socialist revolution and the way of struggle in that direction had been moulded into the blast furnace of democracy. Therefore, Lohia believed that if the struggle for civil liberties/rights is an art of strengthening the spirit and institutions of democracy, then it is an essential condition to have faith in the democratic setup. Because the socio-political activists who struggle on this way keep connected to the life of the people, which is the touch-stone of democracy. Lohia was against the dictatorship imposed on the people, and also against the indirect dictatorship in the name of the people.

Lohia was not opposed to the revolutionary movement in the freedom struggle of India, because the revolutionaries believed the same path right and were ready to sacrifice their lives for it. But Lohia was not an advocate of ‘veers‘ like VD Savarkar, whose character was a set of cowardice, treachery, and conspiracy. In the face of oppression or temptation of power, who would grovel like sheep hidden in the skin of a lion. March 23 is Bhagat Singh’s martyrdom day. That is why Lohia did not formally celebrate his birthday. His decision not to celebrate the birthday signifies deep respect for the revolutionary stream.

It is a distinct feature of Lohia that he was equally supportive of the freedom of the individual along with constitutional civil liberties. Lohia did not accept suppression of individual freedom – whether the freedom of the individual was constrained under the feudal structure or under any modern ideology/system. He believed that human mind is always on the path of quest. Therefore, no ideology/party can be perfect. He was against stagnation/indisposition, gang-captivity and surveillance based on ideologies and political parties. He has included the value of individual freedom in his concept of “Sapta-Kranti”.

In his contemplations Lohia made a special emphasis on the freedom of women in all aspects. In the concept of “Sapta-Kranti”, he has put the goal of gender equality at the top. In this way, Lohia envisaged and advocated for a modern nation-state and democratic socialist system which provide an opportunity for the entire potential of men and women, in both human and civil forms, to flourish. The concept of “Chaukhambha Raj” (four pillar state) propagated by him also contained the idea of freedom of diverse locations/identities vis-a-vis centralist hegemony.

From the time of independence there were some British laws and some new laws that violate civil liberties/rights. Since the introduction of the New Economic Policies in 1991, the enactment and use of such laws in the country has increased rapidly. During the tenure of the current Modi government, not only has there been an unprecedented boom in the enactment/amendment and use of laws that violate civil liberties/rights, it seems that the government has launched a campaign taking repressive actions against the organizations/peoples struggling for or under civil liberties/rights. It has become a common practice to arrest people and file sedition cases against them. The data of the National Crime Records Bureau (NCRB) show that after 2014, sedition cases against citizens and organizations have increased significantly. Of greatest concern is that the high-ranking political leadership is directly involved in suppression of democratic resistance.

For a person like Lohia, who had demanded the resignation of his party’s government in Kerala over an incident of firing on protesters in 1954 (see my article ‘India Towards a Police State’, countercurrents.org, 7 August 2020) the demand for the Bharat-Ratna from the current government; Or the government’s decision to confer the highest civilian award to him would be a blatant contempt to Lohia’s entire political thoughts and deeds.

Second: It is an era of corporate politics. This politics, from running a political party to contesting elections, thrives on the donations given by super rich class of businessmen – Dhanna Seths. Even the need to submit the accounts of donations has been legally abolished. Everyone knows that this wealth of donations comes from the immense profits that business houses have made from the purchase of national assets/resources/public sector undertakings sold by the governments at throwaway prices, and from the government policies that serve their profit-making interests. The charisma of corporate politics is worth noting that even the Prime Minister of the country feels pomp in the companionship of cronies and in using facilities offered by them. The government advocates the private sector openly in Parliament at the expense of the public sector, and is trying hard to make the private sector as strong as possible at the earliest.

Lohia could not have imagined this form the politics would take in independent India. He did not have a bank account. His party did not take money from foreign governments/institutions in the name of socialist revolution or movements. Lohia propounded the new idea of socialism vis-a-vis capitalism and communism. The present political setup has taken a plunge into corporate capitalism. Needless to say, that the Bharat Ratna to such a leader will be a huge dishonour and injustice.

Actually, there is no justification for giving Lohia the Bharat Ratna by any government other than the present one. If we have a look at the contemporary scenario of the resistance demonstrations all over India, we can find the images of certain icons such as Gandhi, Bhagat Singh, Ambedkar etc. placed at the venues or carried by the protesters. But we never find an image of Lohia among these diverse icons. In this context I would like to mention one episode. I went to Thiruvananthapuram to attend national convention of Socialist Party (India) in November 2016. I reached Cochin after the convention and saw hoardings of multi-coloured pictures of many famous and not-so-famous national-international leaders/thinkers all around. These were put as an advertisement for an upcoming event of Democratic Youth Federation of India (DYFI). There was hardly any leader or thinker left in that colourful fair filled with expensive pictures. I travelled to Alappuzha and looked at all those pictures carefully. Two prominent leaders of freedom movement were missing – Acharya Narendra Dev and Lohia. One can also notice that Lohia does not find any mention in the speeches/slogans at the resistance venues/marches.

This trend shows that the civil society activists/political parties/organizations that hold the resistance demonstrations for civil liberties/rights do not consider Lohia’s ideas and perspective on the subject to be relevant. It is not that they reject Lohias ‘over revolutionary’ ways. The ruling class wants to oust him from the network of power, whether it is knowledge or politics, reason being that the ruling class neither want to wage a decisive war against feudalism-Brahminism, nor against capitalism.

A pertinent question can also be asked while summing up this discussion. Will an appropriate/deserving government ever be possible which could give Bharat Ratna to Lohia? That is, a government which would accept Lohia’s views and perspective about civil liberties/rights at least to a large extent. Lohia’s own Socialist Party merged with the Janata Party in 1977 after four decades of upheavals. In 2011, the half-hearted attempt to reinstate the Socialist Party in Hyderabad had not been much successful. By that time, corporate politics had not only put its feet firmly in the public life of India, it had also sharpened its teeth into the entire polity. Most socialists had become part of corporate politics by then. In view of all this, it can be safely said that Lohia is an unfit icon for the Bharat Ratna in any government, not just the existing one.