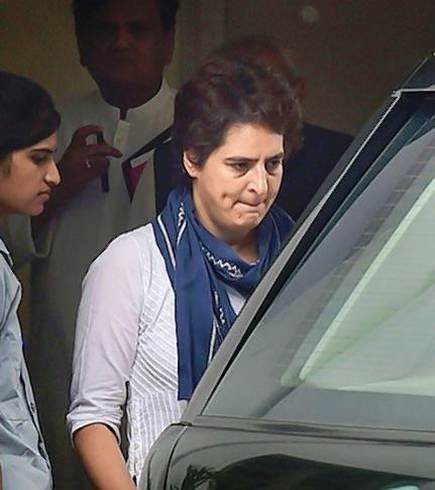 Ms. Vadra’s remarks are important in the backdrop of a growing chorus among a section of the senior leaders like Captain Amarinder Singh and Shashi Tharoor asking her to take over the reins.

The Congress Working Committee (CWC), the highest decision-making body of the party, will now be deliberating on the next president soon after the on-going session of Parliament session ends next week.

Though no date has been fixed, the CWC could meet between August 8 and August 10 if there are no further extensions to the Parliament session that is scheduled to end on August 7.

Mr. Gandhi will be attending the meeting as he is a part of the CWC, said chief spokesperson Randeep Surjewala.

The meeting of general secretaries was called to finalise plans to commemorate the 75th birth anniversary of former Prime Minister Rajiv Gandhi. But party leaders also discussed the leadership vacuum after Mr. Gandhi informed the CWC more than two months ago that he would step down as the party chief.

“When a general secretary suggested that Priyanka ji should consider taking charge, she said her name shouldn’t be taken,” said a senior leader.

All India Congress Committee (AICC) general secretary K.C. Venugopal proposed that a meeting of the CWC could be held after the Parliament session at the convenience of Mr. Gandhi. Apart from discussing the leadership options, the CWC could also discuss a blueprint for turning around the party based on suggestions given by senior leaders like Sam Pitroda.

“All I have said is that the Congress should have 5,000 dedicated workers in every district. The organisation structure should include somebody in charge of membership, human resource, funding, technology and so on,” Mr. Pitroda told The Hindu over phone from the U.S., adding he had done similar reports in 2002 and 1985.

To mark the 75th birth anniversary of Rajiv Gandhi on August 20, achievements of the Rajiv Gandhi government like allowing youth to vote, ushering in information technology, and decentralisation through Panchayati Raj will be showcased and a day later, a high-profile seminar is being planned in Delhi.