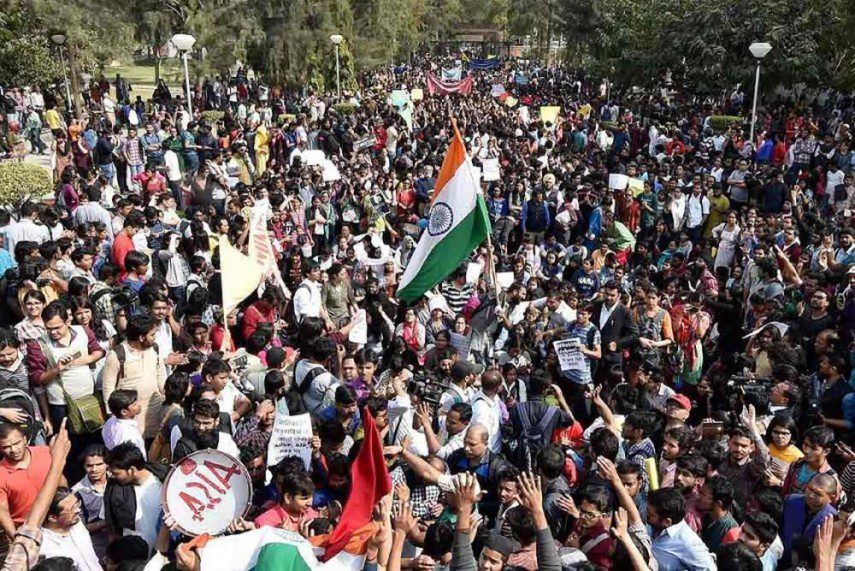 When Modi Sarkar or in correct language BJP came into power most seekers of change argued that how a “sakt” leader, 56 inch chest wala mard well versed in ground reality (thanks to his tea selling experience) and a strong nepotism free government will change India for better. Non Resident Indians who would never come back to live or educate their children in this country rang the loudest bells of welcome for a leader who apparently had the right capitalistic foresight and fix everything that was infected by the socialist visionary Nehru who had faith in science.
To critically understand and talk about the economy may not be everyman’s forte. The gradual pulling out and shameless sell outs of carefully nurtured public sectors were difficult to ignore. Half baked knowledge on economic policies and prejudice against public sector employees (kyunki angoor khatte hain aur is desh mein hum training mein paise nahi lagate) manufactured public consent. Lynchings, spread of communal hatred was sold on the pretext of saving gau mata and the promise of reviving golden days of past glory.
Whenever people got some respite from drama and asked questions about real time issues songs of patriotism were sung aloud and posters of soldiers were pasted on faces to mute protesting voices.
Unemployment remained unaddressed so was the plummeting GDP.
But today when the death toll is mounting and TV news channels are flashing the pictures of the likes of Kanika Kapoor, Yedurappa and NRIs behaving with outmost lack of regard for human life can we not see that today the colour of nepotism is Saffron?
Who takes out a procession ringing bells with police protection while the whole country stays in?
If only we elected “pappu” may be we would have been living in a safer India today.
The scepter in the hands of a narcissistic superstitious old mard clearly is more dangerous than in the hands of a not so rhetorical, educated young fool.

We citizens should let bygones be bygones for now ( keep a mental note of our PR hero’s mistakes), prepare well for the worst and thank Corona ma for finally driving some good sense in our little heads.
Some lessons learnt even before the pandemic created pandemonium are as follows:
1. Never wish for the pulling down of public sectors. If you do then you are this gen’s Kalidas
2. Stop fantasizing Hindi film style “Humko Hero Bachayega”
You have to be your own Hero and Saviour. No one can save you or your country if don’t act responsibly.
3. Pray good sense dawns on us and helps us realise that public funds or taxpayers money cannot be wasted on statues and on foreign travels of our leaders. Money has to be invested in public healthcare and education.
4. Everyman performs their duty in the best interest of their nation. Let’s not play up the songs of patriotism uselessly and distract ourselves from the real issues but simply focus on our duties. Soldiers border pe mar rahein, garib desh mein aur hum kaam ke bojh aur mehengai ke tale.
Sawal hone chahiye khud ke liye: Hum desh ke liye kya kar rahe hai?
5. Let it be Hindu or Muslim we all will die if the public infrastructure is not in place. So let’s ask the right questions and not fall prey to polarizing politics.
6. Say no to news channel propaganda. Switch off the TV if it sings songs of government praise. Because only a “devout Dasa” does that and news channels are suppose to present information and data critically. Not smoothen rough edges of the government.
7. For now the best way to utilize time is to ponder on our past mistakes, be more informed and critical. When this would pass and hopefully if we live we might realise that rhetoric and PR stunts cannot change the nation.
Only you can!