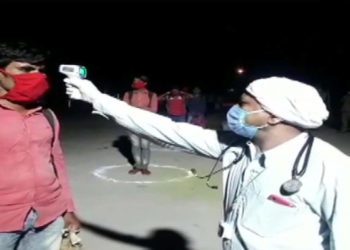 Amid the ongoing lockdown in the country, migrant workers stranded in other states are struggling to return home. After the Yogi government of Uttar Pradesh, now the Madhya Pradesh government  has also taken a big step for the workers of the state. Chief Minister Shivraj Singh Chauhan told on Saturday that the laborers trapped in different districts of MP will be sent to their villages. Vehicles have been provided for this. Everyone will be tested before sending them home.

Shivraj Singh Chauhan also informed about the laborers of Madhya Pradesh trapped in other states. He said that the MP government is bringing back the laborers from Rajasthan as well, whereas 2400 laborers have left from Gujarat in 98 buses.  However, the Chief Minister reiterated that in view of the prevailing circumstances all the lockdown guidelines will be followed. All necessary checks will be done for migrant laborers reaching the border of Madhya Pradesh. Only then will they be sent to their home.

On the other hand, 2400 workers returning from Gujarat late Saturday arrived in MP’s Jhabula district, where thermal screening was done. After full investigation, these laborers will be taken to their village. Let us tell you that earlier the Government of Uttar Pradesh has announced to bring back its workers trapped in other states. Only those workers who have completed the 14-day quarantine period in other states will be brought back.