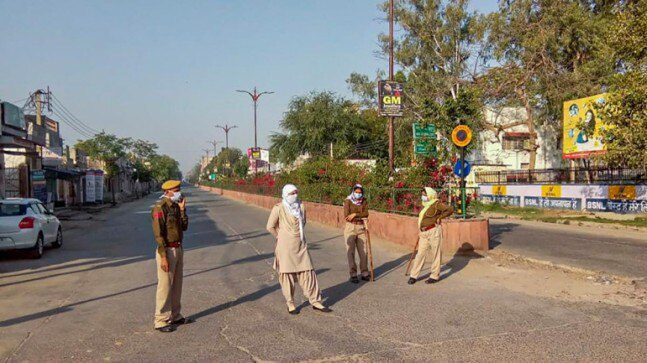 Jaipur | Janta curfew in Rajasthan on Sunday is underway on the call of Prime Minister Narendra Modi. Jhunjhunu and Bhilwara cities of the state have already been locked down due to coronavirus. So far 23 corona positive cases have been reported in the state. Meanwhile, roads in the state were deserted since morning. At the same time, temples have also been closed for the people. At the same time, 48 trains have been closed till 25 March.

Six new infected have been reported on Saturday. It has five Bhilwaras and one from Jaipur. All five of Bhilwara belong to the infected hospital staff, who came in contact with the infected doctor. With this, the figure of total positive patients in the state reached 23. Earlier on Friday, eight cases of corona were reported in Rajasthan, of which six were from Bhilwara and two from Jaipur.

Lockdown in Jhunjhunu and Bhilwara

Jhunjhunu and Bhilwara cities of the state have already been locked down due to coronavirus. Police is also informing the people about the public curfew through loudspeakers. Governor Kalraj will not meet anyone on Sunday. The Governor stayed at his residence in Raj Bhavan. The Governor will come to the door of the main building of his residence at Raj Bhavan at 5 pm on Sunday. Mishra will stand at the door of his residence and play the plate and encourage the health workers involved in the protection against the corona virus.

People kept telling each other how to avoid corona

On Saturday, people were seen in some main places in the state, informing each other about how to avoid coronavirus. With this, some people were also seen talking about keeping the necessities at home. The 11 positive cases in the state in the last 24 hours also remained a matter of discussion among the people.

Most of the temples of the state have already banned visits

Visions of devotees have already been stopped at Khatushyamji, Brahma Temple, Salasar Balaji, Sanwaliyaji, Mehandipur Balaji, Srinathji Temple in the state. Along with this, Govind Dev Ji, Motidungari Temple of Jaipur will also be closed. Only two of the seven gates will remain open in Ajmer Dargah. For the first time in the history of 299 years in Khatushyam, the pats have been closed till 31 March. However, the worship of Baba Shyam will remain the same. The priest family will perform the routine arti.