Is the BJP Health Minister Lying?

Is the BJP Health Minister Lying? 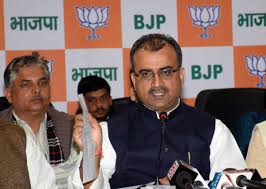 Patna| The health minister of Bihar, BJP’s Mangal Pandey has been caught sharing fudged data about screening of people of Bihar.

Since the outbreak of Corona virus in the country, various state governments have been making tall claims about testing and screening of the people, which are quite different from the ground reality. They have been caught making the false claims, still, just to save their face they keep on fudging data and making fake claims.

There had been incidents of Indore Administration making tall claims of screening the number of people, which comes out to be more than the actual population of the city!

The Bihar Health Minister Mangal Pandey just joined the club of data fudging politicians. He made two tweets in a span of two days regarding the claims.

In the first tweet, made at 20:13 Hrs on May 06, the Bihar Health Minister claims that about 9.25 Cr people have been screened.

In the second tweet, the health minister claims about door to door screening of people of Bihar. As per the tweet, which was done on May 07, at 13:15 Hrs, he claims to have screened 61,23,344 families in which around 10 Crore 11 lakh people have been screened.

That simply means that the Bihar Health Team was able to conduct screening of 86 Lakh people, in a span of less than 15 hours. The speed of screening seems too good to believe.

Same has raised questions among the twitterati that either the BJP minister is lying about the data, or he has no idea whatsoever about the screening being done on ground.

Bihar government has already been in question over the issue of migrant laborers and failure to bring back their students from Kota. Even the people of Bihar stuck in Telangana have expressed their anguish against the Bihar government.