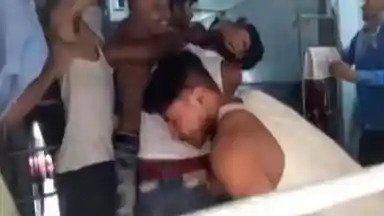 The migrants boarding the Shramik Express train from Mumbai’s Kalyan to Danapur in Bihar clashed with each other for a packet of food at Satna station on Wednesday. The migrant laborers were distraught with hunger, so snatching up on seeing the food. The controversy increased so much that dozens of workers started beating each other with belts. Due to which many workers were injured. Seeing the escalation of the dispute, the GRP started lathi-sticking from outside the bogies, then the matter was settled.

According to sources, in order to ensure that the laborers do not have any problem of eating and drinking, their food was arranged at Satna station. When the train reached the station, the laborers started distributing food and then they clashed.

Since May 1, Railways have run 115 labor special trains, in which more than one lakh people stranded in different parts of the country have been taken home due to lockdown. Railways said that out of 42 trains on Wednesday, 22 have departed in the day and 20 more trains will run at night.

At the same time, a laborer going from Maharashtra’s Nagpur district to Jharkhand died in a hospital in Bilaspur, Chhattisgarh. With the consent of the family, his funeral was done here with the help of a social organization.