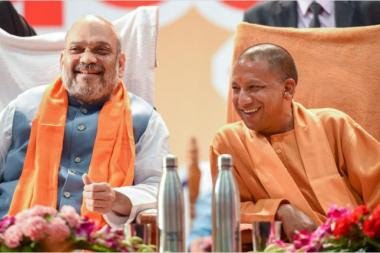 Home minister and BJP president Amit Shah on Sunday revealed that Yogi Adityanath was chosen for the top job in Uttar Pradesh despite having “no administrative experience” because he and Prime Minister Narendra Modi had faith in his abilities.

Speaking at a function in Lucknow, where the UP chief minister was also present, Shah said that Yogi had not run even a municipality as he was a temple head.

“No one had imagined Yogi-ji to be the CM. People called us up & said that he has not even administered a municipality, he has never been a minister, he is a ‘sanyasi’ and he is being made the CM of such a large state!” Shah was quoted as saying by ANI.

The selection of Yogi for the top post had infuriated many as he did not have any administrative experience.

Shah said Adityanath was handed over the reins of Uttar Pradesh as he was “work-oriented” and “made up for his lack of experience with his work ethic”.

“People asked me why we were giving him the reins of such a big state. But Modi and I decided to make him Chief Minister as we felt he was determined and capable of hard work and would adapt to all situations. So we handed over UP’s future in hands of Yogi-ji. That decision was proven right by him,” Shah said.