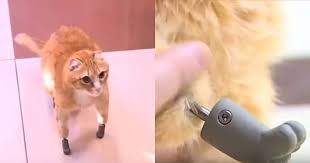 Harsh winters in Russia’s Siberia region often claimed the lives of house pets, who can fall prey to frostbite and the surgical amputation of their limbs. With little ability to survive, this frequently leads to the poor creatures being euthanized.

However, a cat named Ryzhik—which means Redhead or Ginger—has been given a new lease on life after undergoing an unprecedented set of operations granting the quadruple-amputee four prosthetic paws constructed of titanium.

The surgery was carried out by a clinic in Novosibirsk that specializes in implanting artificial limbs, according to Siberian Times.

The poor cat had suffered from gangrene and frostbite on his ears and four paws, according to veterinary surgeon Sergei Gorshkov, thus requiring the amputation of Ryzhik’s paws.

The clinic then used computer tomography and 3D-modeling technology to construct the perfect set of artificial paws for the cat, which would not only serve the basic function of prosthetic limbs but would be sufficiently comfortable too, ensuring that the feline wouldn’t try to pry the new limbs off.

Ryzhik is now the only cat in Russia, and likely the world, which is wholly reliant on four prosthetics.

The cat is already using its new paws to play with—and defend itself from—other cats.

Gorshkov’s clinic has been working to patent new techniques that would allow various animals to enjoy a new life after the traumatic loss of their limbs.

Such new forms of prosthesis includes rebuilt beaks for parrots, hoods for cattle, and artificial limbs for birds.