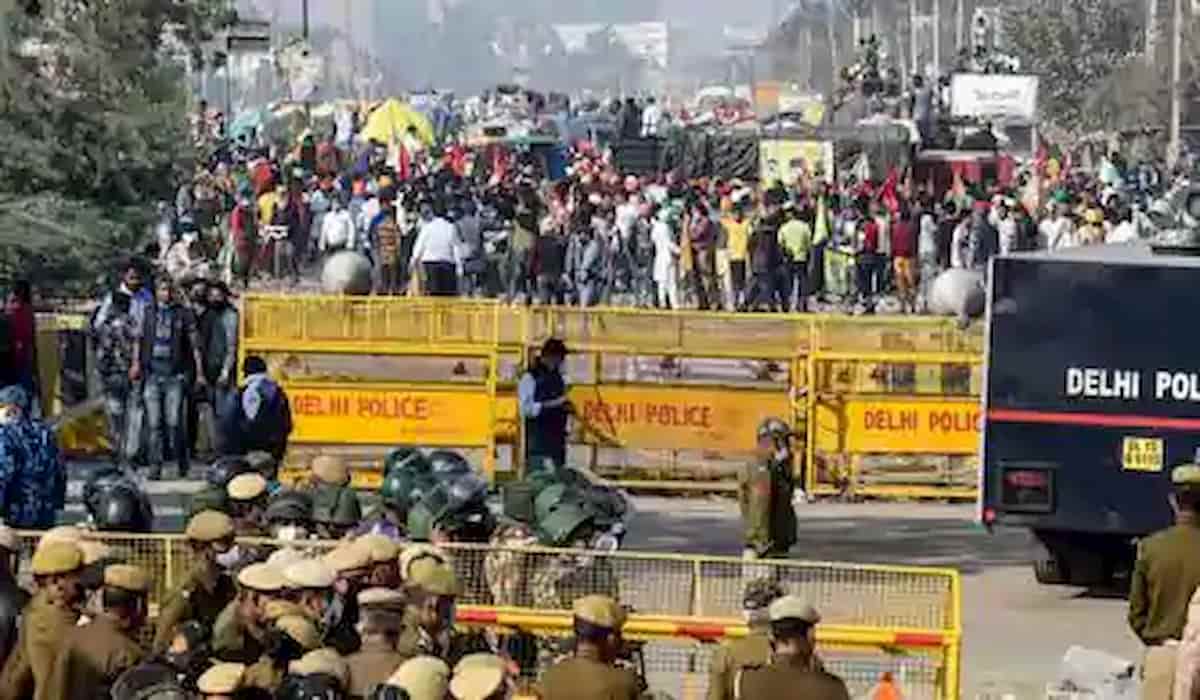 The farmer is the provider of food (Anndata) to the world, but in today’s system, he often has a craving for grains. People thrive in towns and cities using his earnings, but only disasters come in his share. The crop dries due to droughts. Floods submerge fields. But a big disaster over these two comes when the price of the crop that came home after a year’s hard work is so low that even the cost and expense does not come out. … If the farmers are in a bad condition today, then it is only the anti-farmer policies of the governments that are responsible for destroying the villages and making a part of the metropolitan cities Alkapuri. … There are villages on the foot-board of the country and on the foot-board of the cities, there are residences of the people who have been desolated from the villages. (‘Khet Kisani Ki Nayi Neeti’ (New Farming Policy), Sachchidanand Sinha, Samajwadi Jan Parishad, 2004)

The incessant appropriation of everything from education to defense, from public sector undertakings to small-scale-retail businesses, from government offices to the Parliament Bhawan and from Union Public Service Commission (UPSC) to literature-arts-culture centers – and of bringing everything under corporate capitalist system has been going on unabated for the last three decades in the country. In such a situation, a vast and important sector like agriculture cannot be left outside this process. Manmohan Singh, who implanted the axis of corporate capitalism instead of constitutional socialism, carried out this process in a classical manner, as finance minister, and later as prime minister. As a scholar economist and to some extent as a member of the Congress Party, which had been an erstwhile forum for the struggle for independence, his eyes were always open to these ongoings. The poet-hearted Atal Bihari Vajpayee would sometimes open his eyes and at other times used to avert his gaze from this process. Narendra Modi is the Prime Minister who, with closed eyes, provided imparted unprecedented acceleration to the process of corporation capitalism.  At the Chousar of power he plays blind bets and then claps in favor of corporate houses. He made a blatant announcement of his role as the facilitator of capitalist class as soon as he became Prime Minister – the Congress made some amendments in favor of farmers in the Land Acquisition Act of 1894. As soon as he became Prime Minister, Modi tried very hard to repeal those amendments through an Ordinance in favor of capitalists.

Three agriculture-related Ordinances – The Farmers Produce Trade and Commerce (Promotion and Facilitation) Ordinance, 2020; The Farmers (Empowerment and Protection) Agreement on Price Assurance and Farm Services Ordinance, 2020; and The Essential Commodities (Amendment) Ordinance, 2020 – brought by the central government at the time of the Corona pandemic are in alignment with the above process and highlight Modi’s specific role in it. In fact, it was only under the colonial system that agriculture was subordinated to the business interests of the East India Company/England in a planned manner. As a result, Kheti  (cultivation) fell from the category of Uttam (best) to the category of Adham (lowest). Even after independence, agriculture/village was kept as a colony of industry/city for development. However, in light of the Directive Principles of State Policy enshrined in the constitution in order to establish an equitable society, there was no exemption for open loot like the colonial era. Despite being subordinate to industry, the agriculture sector repeatedly supported the country’s economy in intermittent economic crisis/recession. Now Modi and his government are intent on handing over agriculture sector to corporate houses. Corporate houses do not miss out on any profitable deal. Due to neo-liberal policies, the vast agricultural sector is doomed to fall prey to their profits.

Raised on the strength of small businessmen of small capital, the RSS/BJP are engaged in worshiping the big capital as a holy cow. The Modi-Bhagwat-led RSS/BJP has made the corporate houses opulent and the corporate houses have made the RSS/BJP immensely rich. Like a person who went blind in the month of spring sees green everywhere, they continue to spread the illusion that labour and agrarian laws, actually created to serve the corporate interest, will benefit the workers/peasants! The matter of worshiping big capital is not limited to the RSS/BJP. No economist, politician, even labourer/peasant leader, decisively tells the truth that big capital of corporate houses is a result of the loot of the national natural resources, agriculture and cheap labour. They have carried out this loot with the consent and cooperation of the ruling class of the country. The difference is that earlier corporate houses used to venture into the lap of parties/leaders, now the party and leaders have sat in the lap of corporate houses. Not only the Godi Media, Godi Rajaniti is also at its peak in present India.

If you want to see the intoxication of worshiping big capital, then see the behaviour of RSS/BJP and its supporters. Farmers say that agricultural laws are not in their interest, but the Prime Minister retorts that these laws are full of rights, opportunities and possibilities for farmers. The farmers, as part of their own decision, have been protesting against the agricultural laws for months and marched to knock on the doors of the capital on the Constitution Day (26 November) with the Delhi Chalo call. But the Prime Minister constantly promotes the narrative that the farmers have been misled by the opposition – an opposition that has tricked the farmers for 70 years. Theoretically peasants are considered to be regressive and a dying section even in the communist ideology; but Modi and his blind supporters are publicizing them as living beings without any faculties.

Modi and his government complain that only Punjab farmers are against agricultural laws, as if Punjab is not a province of India. It should be said instead that the farmers of Punjab have shown the way to the entire country by agitating against them from the day the ordinances were passed. Perhaps the farmers of Punjab have offended the power by committing this folly/blight and consequently are now being termed as Khalistani. The ruling class, which plays the role of middleman in selling the country’s resources/enterprises to corporate houses/multinationals at throw away prices, talks about Bichauliyas (intermediaries) at agriculture produce markets, as if they are a group involved in heinous crime! When intoxication of worshipping big capital catch hold of mind then every Sikh is seen as Khalistani, every Muslim as terrorist, every human rights activist as ‘Urban Naxal’ and every anti-Modi as Pakistani. The Prime Minister alleges that a new trend of spreading confusion and fear among the people about decisions is seen these days. But he should see that he himself has propelled this unprecedented trend for the last seven years – defending all decisions one by one in corporate-interest by making the noise about how nothing has been achieved in the last 65 years in the country.

Farmers reached the main borders of Delhi on the Constitution Day, facing severe obstructions, water splashes and tear gas perpetrated by the police. But the police at borders did not let them enter the capital. However, under pressure, the farmers were allowed to congregate in Burari Maidan under the police circle, as per the agreement between the Central and Delhi governments. But the steadfast farmers refused to be ‘imprisoned’ at Burari Maidan sticking to their original demand to protest at Jantar-Mantar as per schedule. They kept staging sit-in at the Singhu and Tikri borders of Delhi. On the other hand, farmers of western Uttar Pradesh are sitting on the Ghazipur border protesting against the same agricultural laws. The talks between the government and the representatives of the farmers’ organizations in Punjab on 1 and 3 December 2020 have been inconclusive like the one held on 13 November 2020. Now there will be talks again on 5 December, which are expected to continue further. In the mean time the farmers’ organizations have given a call for Bharat Band on 8 December 2020. They have not wound up their sit-in, and several farmers’ organizations along with trade unions and civil society bodies have declared their support to the movement. Farmers have come with a provision of 6 months of ration, and are reiterating their resolve not to return before their demands are met. There is a demand to accord legal status to the Minimum Support Price (MSP), as well as the demand to withdraw all the three agricultural laws. It is noteworthy that the movement is completely peaceful and dignified, and its leaders are confident and willing to negotiate with the government.

Whether or not the government will accept the demands of farmers now or in the future will depend on whether the agitating farmers are willing to achieve the level of a proper political consciousness. The way in which the world and the country are changing rapidly, it is necessary to change the laws related to farming, logistics and institutions etc. In today’s India, farming cannot be established above industry or equivalent. For this, there would be a need to return to the concept of decentralization found in Gandhi’s Gram Swaraj (Village Self-rule) and Lohia’s Chowkhambha Rajya (Four Pillar State). The enlightened progressive section of the country will not allow taking this ‘backward’ task in hands. Agriculture cannot be given equal importance even with the service sector. In the present situation, the only thing that can be done that changes should be brought under the constitutional socialist system and not under the corporate capitalist system. The farmers themselves can take initiative and set up cooperative units across the country, where fresh, quality food items can be available at reasonable rates. This will increase their income and employment. Farmer organizations across the country can play a role in this.

Farmers are the largest voter group in the country. The farmer’s existence is completed by adding the agriculture labourers, who mostly belong to the Dalit castes, and the artisans (blacksmiths, carpenters, barbers, dhobis, telis, weavers, etc.) who belong to the most backward castes. There is also a sizable tribal population in India who are primitive farmers also.  In this huge farming-related population, the hard work of women is equal if not more than that of men. Only by freeing the mindset of casteism, patriarchy and untouchability, can the farmers fight a united and long battle against the corporate capitalist system. They have  inherited the idea/practice of mutual brotherhood and community living. Only they can treat the poison of communalism that is being spread in the society in order to preserve the corporate capitalist system. From the very beginning, the peasantry had a dilemma-less anti-imperialist consciousness in the struggle for independence, while the majority of the feudal and budding middle class remained in dilemma till the end. The statements of many farmers in the present movement show that they are conscious of the neo-imperialist gripes that are being imposed on the country. This political consciousness of the peasants may be the basis of the anti-neo-imperialist consciousness necessary for the restoration of freedom, sovereignty, self-reliance.