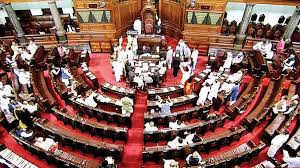 The Election Commission has postponed the Rajya Sabha election due to the corona virus. Elections were announced on 55 of the Rajya Sabha, out of which candidates have won unopposed in 37 seats, but for 18 seats, voting was to be held on 26 March. It has been postponed for the time being.

After Tuesday’s meeting, the Election Commission decided to postpone the elections to the Rajya Sabha. The Election Commission says that the situation is not right now, as if there is an election now, there will be a gathering of voters, which may lead to possibility of infection. People are being stopped from gathering everywhere in the country. In such a situation the election is deferred.

However, a new date has not been released yet. The tenure of members in 55 seats of 17 states in Rajya Sabha is being completed on different dates in April. Among them, the seats of Maharashtra (7), Odisha (4), Tamil Nadu (6) and West Bengal (5) are going vacant on April 2.