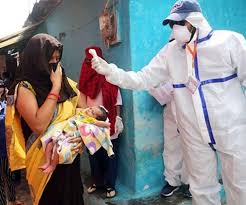 New Delhi| Coronavirus infection cases in the country crossed 56,000 on Thursday. It is said that in the last 24 hours, many urban areas including Mumbai, Ahmedabad and Chennai have registered an increase in cases of infection. However, so far more than 16 thousand people have recovered and gone to their homes.

Data declared by various states and union territories shows that more than 5000 new cases have been reported across the country since Wednesday morning. The death toll across the country has crossed 1,800, while deaths have also been reported in paramilitary forces. Officials said that 55-year-old head constable of CISF posted at Mumbai International Airport died due to corona virus while two BSF personnel have also died.

In the fight against Covid-19, a large number of health personnel and security personnel deployed on the front have been found infected with Covid-19 in recent times. In Maharashtra alone, at least 531 policemen are infected with Covid-19 and are undergoing treatment at various hospitals in the state, an official said. These include 51 officers and 480 constables. So far 39 of these policemen have been cured while five policemen have died. 50 more people were found infected with the corona virus in the state’s Dharavi slum

In Madhya Pradesh, the incidence of infection increased to 3,252 as 114 more persons were found infected with Covid-19. 47 of these cases have come from Bhopal. Maharashtra and Gujarat are still at the top in cases of infection, Tamil Nadu cases have crossed 5000 as 580 new cases were reported there in the day. The death toll in the southern state has risen to 37 as two more women died in the day due to Covid-19.

Due to seven more deaths from Covid-19 in West Bengal, the death toll rose to 79 while in the last 24 hours 92 new cases have been reported. This information was given in the state health bulletin. So far a total of 1548 cases have been reported in the state, out of which 1101 are undergoing treatment. In Kerala for the second consecutive day, no new case of Covid-19 was revealed in the state. Also, on May 1, May 3 and May 4, no new cases were revealed.