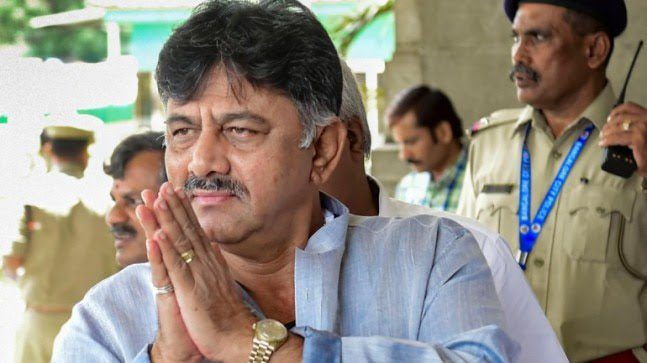 Congress leaders, led by General Secretary K C Venugopal, were denied permission to visit D K Shivakumar who is admitted in Ram Manohar Lohia Hospital in Delhi. Shivakumar was admitted to the hospital today after he was arrested by the Enforcement Directorate (ED) on Tuesday in a money laundering case. Congress leaders have called his arrest as ‘political vendetta’ by the BJP-led central government.

Meanwhile, supporters of Shivakumar burned KSRTC buses in Kanakapura and Ramanagara Wednesday morning to mark their protest against his arrest. Crowds shouting slogans blocked the main roads in Chennapattna, Kanakapura and burn tyres. As a precautionary measure, the district administration has declared holiday to schools and colleges on Wednesday.

The state Congress has called for a state-wide bandh following Shivakumar’s arrest in the money laundering case. The case registered by the ED last year is the fall out of an investigation carried out by the income tax department against Shivakumar in 2017 where Rs 8.83 crore in unaccounted cash was found in New Delhi in locations linked to the Congress leader. The ED had in September last year registered the money laundering case against Shivakumar and others based on a chargesheet (prosecution complaint) filed by the Income Tax Department in a court here for alleged tax evasion and hawala transactions worth crores.