Chandauli Youth Beaten Up Amid Lockdown

Chandauli Youth Beaten Up Amid Lockdown 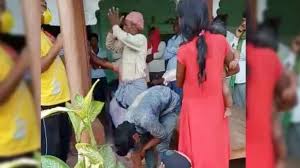 On  one hand, while efforts are being carried out to tackle the corona virus, on the other hand, the merciless face of some people is also coming out. An incident has come out of Chandauli district of UP that clearly shows how much people are taking away the lockdown and taking the law in their hands for their false pride.

According to the information, a young man was not only beaten publicly for stealing gram from a field in Amda village of Kandwa police station of Chandauli, rather, his elderly father was also insulted in front of hundreds of people. On stealing  gram from the field, the young man was beaten first and then the father of the young man was also humiliated.

Not only this, the crowd also made the young man fall at the feet of hundreds of people of the village. The video of this entire incident has gone viral. After the video went viral, the police have registered a case against the accused  in various sections.