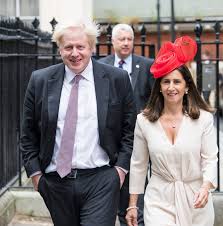 Boris Johnson became the first Prime Minister in Britain’s past 250-year history to divorce his wife while in office. With this, it has become easier for Johnson to marry his fiancée Carrie Symonds. Let us tell you that a divorce petition was filed earlier this year by Marina Wheeler, Johnson’s ex-wife of Indian origin, who has recently got permission.

The 55-year-old Johnson announced an engagement with Carrie Symonds shortly after the divorce application was filed in February. Carrie, 32, has been living in Downing Street since July last year. She gave birth to the baby last Wednesday.

According to the Daily Mirror report, Johnson and Wheeler’s divorce application was granted just before the child’s birth. Wheeler was Johnson’s second wife. Marina Wheeler’s mother Deep Singh was from Punjab. Wheeler is a lawyer and has four children from Johnson.

Johnson was first married to Allegra Mostyn-Quain, who ran from 1987 to 1993. With this divorce, after Augustus Fitzroy in 1769, Boris Johnson became the first Prime Minister of Britain to be divorced while in office. Augustus Fritzroy was Duke of Grafton.