Books can change the world, Books on Wheels

Books can change the world, Books on Wheels 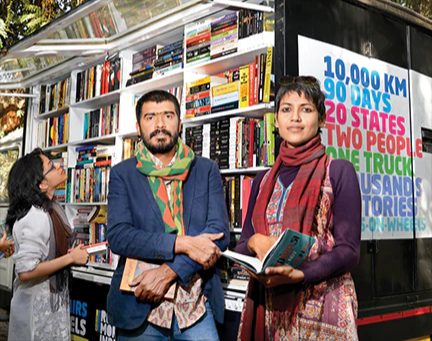 Satabdi Mishra and Akshaya Rautaray became friends over books and ideas. And, like every true bibliophile, they wanted to share their love of books with the world. So they converted a mini-van into a travelling book-shop and started a journey that is now Walking BookFairs.

Though they have a store back home in Bhubaneswar, from where they sell books, Mishra, 34, and Rautaray, 36, are happiest taking their books to corners of India where few have. Starting 15 Dec-ember last year, they travelled 10,000 kilometres, across 20 states, over 90 days with a book truck to spread the message of reading.

The seeds of the idea were sown when Mishra and Rautaray started talking about rights and responsibilities, and how they could contribute towards creating “a world without boundaries”. Books and reading, they were convinced, would play a crucial role. However, they realized the challenge lay in providing access to those who have none. “We can’t just talk, we must do something, we thought. And that is how we started Walking BookFairs in 2014,” says Mishra. Rautaray quit his job at a bookstore, while Mishra was taking a break after her baby at the time.

Having perceived the difficulty of the common man stepping into a bookshop, they decided they would break those barriers by “taking books to them”. With no resources to start a bookshop, they filled their backpacks with books and reached Koraput, in rural Odisha, one day. Wandering through the village roads, they displayed (Oriya and English) books at bus stops, footpaths and other public spaces.

They stopped and handed out books wherever they spotted a crowd. Ordinary village folk eventually started picking them up, casting aside their inhibitions. Every time curious children gathered around them, they sat down and read to them. “We had the best time reading stories to a bunch of children,” says Mishra.

It was this power of storytelling that fuelled the Walking BookFairs dream. The partners decided to get an old Maruti Omni, which was being used as an ambulance, and had it hand-painted. They packed books in boxes and set out once again for the dusty villages and small towns in Odisha. Mainly carrying children’s books and translated world literature, priced between Rs 35 and Rs 100, they displayed them at public places and outside schools, colleges and offices. “We also organized activities with musicians and artists. Once, we even had the author Ruskin Bond over, which turned out to be great fun,” says Mishra.

In Bhubaneswar, they found a small restaurant with a garden and identified a corner they could convert into a store for a small rent. “We put in a bookshelf, got some chairs, candles, tea cups and got going,” says Rautaray. It was a space where people could drop by, browse, have tea and enjoy a conversation.

Books were offered at a discount of 20 per cent through the year – Mishra and Rautaray believe affordable books can improve access. Anyone who knew them was startled by their passion. Given that physical bookshops were struggling to survive and printed books were faced with challenges, many advised caution.

However, maintaining the shop proved to be a challenge, as it was located in an open space, with just one bookshelf and no protection from wind and rain. Undeterred, they moved to a tiny shack, in the same area, with a lush garden full of squirrels and frogs. Here they organized poetry sessions, conversations with authors and other activities to engage readers.

The Walking BookFairs cross-country tour, between December 2015 and March 2016, was to spread the message: “Read More India”. Partnering with three publishing houses, the friends got a newly converted pickup (book truck), with shelves stacked with 4,000 books, and set out on their journey. When I meet Mishra and Rautaray in Delhi, they have been on the road for 58 days. “It’s a difficult and expensive tour, but it’s very important for us,” says Mishra, the driver on the journey.

Travelling around India brought several insights: Few Indians actually read books; also there are very few bookshops and libraries in most parts of the country. Many schools and colleges have no libraries and do not introduce students to storybooks at all. Young students admit to having never read books beyond their curricula.

Says a worried Mishra: “It is very strange that they will vote and become citizens. Everything is dependent on what they think and their perception of the world. But if we do not have an understanding of the times we live in, what kind of a world are we going to create? This is why everyone must read more books.”

India’s contrasts – especially the extremes of poverty and wealth – and diversity astonished them. “Our journey was not just about books. We experienced people, their lifestyle, culture, food, thinking. Travelling around remote corners of India was overwhelming … We talk about development, but where is the clean water? Our farmers are poor, and getting poorer by the day. It’s all so unequal, so unfair, I can’t believe we live in the same country,” says Mishra. Rautaray looks disturbed as he describes how in every city they found residential colonies with modern amenities: gyms, swimming pools but “strangely no bookshops or libraries”.

However, they discovered there are others who believe that books can change the world and do their bit. For instance, in Pune, they met a group that runs a library on wheels-they deliver storybooks to readers and collect them later. In Madurai, they met a man who sells Tamil books out of a van. And in Hyderabad, they met Sadiq who sells poetry from a pushcart that has become very popular.

With so much of the country to cover, they were back on the road again: This September they travelled on a two-wheeler from Odisha to Kerala with about 200 books. Stopping at highway dhabas, they met the owners and truck drivers and spoke to the locals working at tea stalls, garages and small eateries, in an attempt to understand their priorities and how ideas and imagination figured in their harsh lives. They shared books and stories wherever they could.

Once back in Bhubaneswar, they had to close down their book shack briefly due to a property dispute. But fortunately, the Walking BookFairs store has found a new space where books will be shared with a smile, there will be hot tea and the chatter of friends and book-lovers.

And this journey, on the road less travelled, will go on.