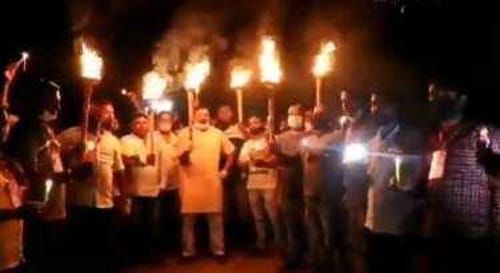 In the midst of national lockdown, while the entire nation followed call of PM Narendra Modi to switch off the lights for 9 minutes at 9 PM last night, BJP’s lone MLA in Telangana, Raja Singh started a protest march against Corona Virus. In place of candles and earthen lamps, the MLA and his supporters had wooden torches in their hands.

While holding the torches, the MLA and his supporters also raised racist slogans “Chinese virus go back”. Raja Singh is known to make communal slogans in his speeches, mostly during elections.

Raja Singh is an MLA from Goshamahal constituency of Hyderabad. He assembled with more than a dozen supporters out of which five people besides him were holding the fire torches in their hands while other people were holding candles.  A video of the incident is going viral on social media. Raja Singh has himself shared the pictures of the incident on his official twitter handle.