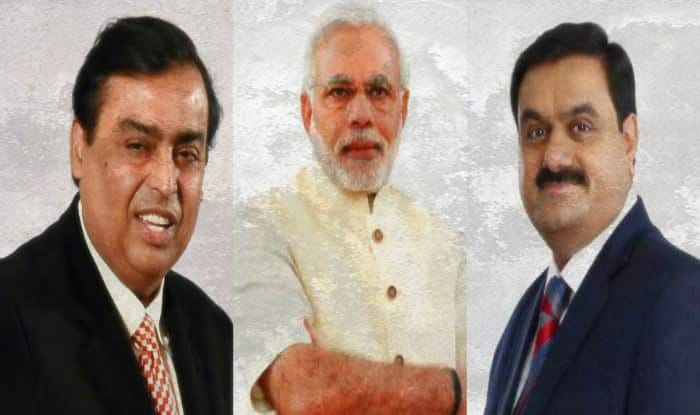 Summary
I Both Mukesh Ambani and Gautam Adani have expressed their desire to penetrate India’s agriculture sector in recent times.
II Author

Both Mukesh Ambani and Gautam Adani have expressed their desire to penetrate India’s agriculture sector in recent times.

As farmers prepare to block the Delhi-Jaipur Highway in protest against the new farm laws, Prime Minister Narendra Modi and his relationship with billionaire industrialist Mukesh Ambani has come under scrutiny. Netizens targeted Modi for the farm laws that are increasingly being seen as heavily tilted in favour of the corporates. Twitter was set ablaze with #ModiHaiAmbaniKa which has been trending since last night. It became a top trending topic in India within a short span of time.

While some questioned the need for introducing a new structure when the farmers are happy with the existing one, other simply poked fun about Modi’s relationship with the Adanis and Ambanis.

There were some who urged the government to not come under the influence of rich corporates and maintain integrity.

The new farm laws have unleashed an intense debate about the need for the corporatisation of the agriculture sector. The government argues that the new structure will help the farmers directly find the buyers for their produce instead of relying on the existing APMC system. This in turn is expected to lead to better price discovery and thus help the farmers earn more from their produce.

However, the farmers’ bodies are apprehensive about the lack of safeguards in the new bills.

The Farmers (Empowerment and Protection) Agreement on Price Assurance and Farm Services Act, 2020, provides for contract farming, under which farmers will produce crops as per contracts with corporate investors for a mutually agreed remuneration. But the contracts are not required to be in written form. This worries the farmers as in a case of dispute, a verbal contract will be difficult to prove and forced upon on a buyer.

The Opposition which is standing in support of the farmers also argues that by bypassing the MSP system, the farmers are being needlessly exposed to market uncertainty along with unpredictable weather which the farmers already have to deal with.