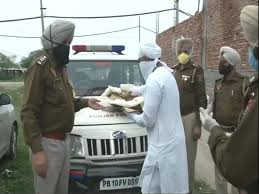 Local Police Commissioner Gurpreet Singh Bhullar and his team, have taken up the responsibility of providing food to the poor during lockdown, in Jalandhar. On Thursday, the City Police transported packed food for about two thousand people. Social distance was also taken care of so that people do not feel crowded.

The team of DCP Balkar Singh, DCP Gurmeet Singh along with Commissioner Bhullar traced the areas of Jalandhar, where poor population resides. They can barely eat two meals a day. A list of more than two thousand people was prepared from village Dhina Jamsher to Indira Colony slum areas, Sanjay Gandhi Nagar Industrial Area. On Thursday, Commissioner Bhullar started this campaign with all the officials and carried packet-to-door food. In addition to this, NGOs are being taken along with many Gurudwaras.