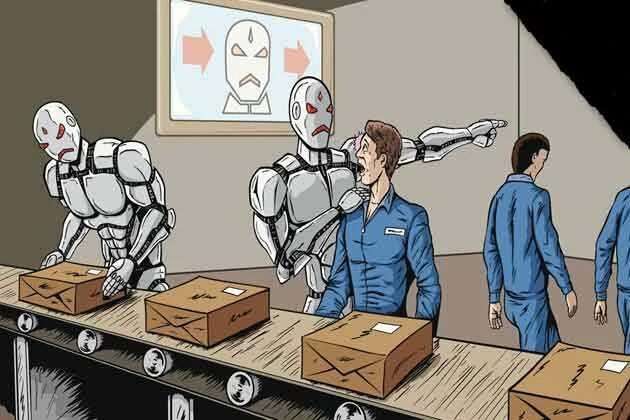 Many international companies like Tesla have already integrated automation into their work processes in a huge way that they do not need to worry about sick workers or wages or hiring and layoffs.

At last count, more than 324 cases of COVID-19 have been detected in India. As the Modi government is forced to stop all international flights, cancel more than 200 Express trains and call a voluntary all India curfew which is now underway all across India, it is India’s economy that is getting burned to ashes.

The travel & tourism industry has already been badly hit with a 67% reduction in foreign tourists and a 40% reduction in domestic tourists just in the month of February when India did not even start witnessing any significant rise in cases.
Airlines are already on the verge of bankruptcy and will not survive without a government bailout. But if the restrictions and lockdowns are to continue any longer, India’s informal sector where nearly 81% of the employed earn their livelihood from is going to completely collapse.

God forbids India’s infection rate is to increase and the government is forced to adopt harsher measures, corporate India may have to look for ways to make things work without India’s workforce.
The companies are already taking a severe financial hit from the pandemic. The losing investors will force the companies to recoup the losses and be more future proof for which automation of jobs is the only answer.

Even before the virus hit, more than 56 million jobs in India were at risk of being replaced by artificial intelligence and machines.

A 2019 World Bank report estimates that 69% of today’s jobs in India and 77% of the jobs in China will be get sacrificed to automation within the next 10 years.

The current pandemic and resulting shut down all across the world may only hasten the process of automation. But this can be particularly debilitating for countries like China and India where much of the population is still young.

The working-age population in India increased by 300 million in the period between 1990 and 2013 while the number of people employed grew by only 140 million. Clearly, India is struggling to keep pace with the growing demand for jobs and the impending automation boom may create more chaos in India’s job market in the coming years.

Most of India’s jobs are created in the informal sectors where small businesses and traders are the job providers. Even the small business owners will be at risk as they will find it difficult to compete with big corporates with all the funding and technology in their hand.

Many international companies like Tesla have already integrated automation into their work processes in a huge way that they do not need to worry about sick workers or wages or hiring and layoffs.

India has already been in the midst of a slowdown. Rahul Bajoria, Chief India economist at Barclays, said India’s biggest growth risk would be from prolonged mass quarantine measures and restriction in movement which will pullback consumer spending, investment and service activity.
He also predicted GDP growth will fall to as low as 3.5% by April 1.

India’s fiscal position is already very critical and the RBI has been emptying its forex reserves for many weeks now in the quest to save the rupee. So how much more stimulus can the government provide to India’s businesses is to be seen. Meanwhile, it looks like the debt-laden companies of India will have to find their own way out from the current situation and automation looks to be the best bet for them in the long run