40 Buses Departed From Delhi to Bring Back Kota Students

40 Buses Departed From Delhi to Bring Back Kota Students 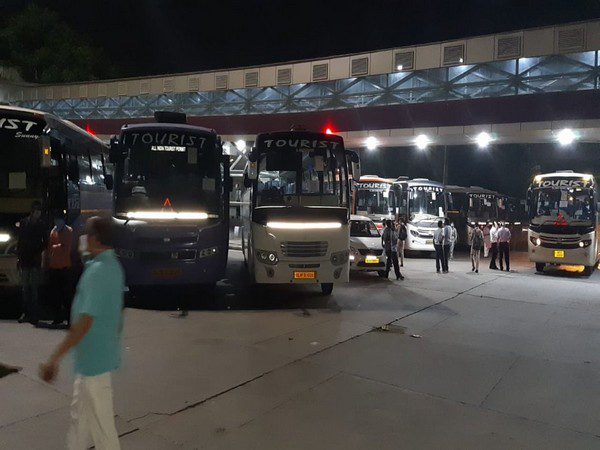 40 buses have left from Delhi for bringing the students of Delhi stranded in Kota, Rajasthan. Transport Minister of Delhi Government Kailash Gehlot spoke with the officers and policemen going in the buses and gave them directions. Medical teams and civil defense volunteers have also gone in a vehicle with these buses.

The Delhi government dispatched 40 buses to bring back the stranded students due to the lockdown in Rajasthan’s Kota. Before departing from the Kashmiri Gate bus base, Delhi Government Transport Minister Kailash Gehlot spoke with the officers and policemen boarding the buses and gave them directions.

Buses sanitised before departing
According to the information, 40 buses are being sent from Kashmiri Gate for Kota. 20 to 22 students are being brought in a bus. That means 900 to 1000 students will return home. Arrangements have also been made for the arrival of students in buses. There is also a medical team including doctors in a train with buses. Apart from this, every bus also has 1-1 Civil Defense Volunteers. These buses can return by Saturday evening.

In fact, many students from other states have gone to their homes from Kota and the students of Delhi are stuck in the hostels there. Parents were constantly pleading with the government and now after the approval of the Center, the Delhi government has made preparations to send buses. Buses at the Kashmiri Gate were sanitized before departure.

There is news of relief for students trapped in Kota, Rajasthan due to Corona virus lockdown. Buses have gone out to pick up students from Delhi. The government had announced this only on Thursday. Delhi Chief Minister Arvind Kejriwal also said this on Friday morning. Kejriwal said that efforts are on to send people from other states stuck in Delhi.

Delhi Chief Minister Arvind Kejriwal said that some children of Delhi who had gone to prepare for IIT in Kota were stranded. My hands were tied because we did not want to take any step without the approval of the Center. The day before, the central government approved. Today about 40 buses are going to Kota from Delhi. Hopefully the children will be back by tomorrow. CM Kejriwal has also appealed that the students stay in the house for 14 days after coming here.