Why PM CARES when we have PMNRF?

Why PM CARES when we have PMNRF? 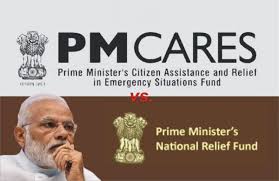 PMNRF or the Prime Minister National Relief Fund was formed in the year 1947 by Pt Jawahar Lal Nehru with the suggestion of Mr. J R D Tata, primarily to help Migrants from Pakistan.

These funds were meant to be spent under the directions of the Prime Minister for providing Relief to people in different situations.

For over 72 years PMNRF has been functional and has garnered the trust and acceptance of everyone.

Never in these 7 decades did we see the spending going more than the available balance. The account is active and functioning in the desired manner… I presume. Gross balance as on 31st March 2020 is around ₹3800 Crores.

If everything was perfect and clean, then what was the need to form Prime Minister Citizens Assistant and Response in Emergency Situation (PM CARES) Funds with basically similar objectives?

Prime Minister has not clarified and his Cabinet talks everything but will never reply to the questions asked.

Is it exclusive for COVID19 pandemic? The answer is no, PM Cares will continue to exist in future as well. PMNRF was started by Pandit Nehru and Modi does not like him.

Unfortunately this not the complete truth.

Since 2014 after Modi Govt came to power, a lot of things started changing dramatically more so in the transparency of the Govt spending.

Modi is anything but not benevolent…we are aware that 250 crore rupees are still lying unspent while the families of Pulwama victims are yet to receive monetary compensation.

What Exactly are we missing?

Till the FY 2015-16 the PMNRF was managed in a very transparent manner with CAG auditing it and the report being published on the official website.

The audited balance sheet of PMNRF from the year 2009 to 2019 is available on the official website.

Till the FY 2013-14 the PMNRF was managed in a very transparent manner with CAG auditing it and the report being published on the official website.

Then why am I writing this article?

Till the year 2015-16 Modi followed the rules. But from 2016-17 he got to his dirty work of implementing Gujarat Model, unfortunately that was the year of Demonetisation also.

What happened in the PMNRF was really shocking, he not only reduced spending the funds for Relief Measures but also started doing things which never happened before.

Tier-II bonds are sort of unofficial bonds which promise to give better returns with higher risk and the Banks do not mention them in their books. So they cannot be traced unless PMO gives the details.

In the year 2017-18 the invested 1000 crores Bonds of the total 2750 crores, were either sold off or given away, there’s no mention of the details in the balance sheet, while it shows 1750 crores still invested in Tier-II Bonds.

In the year 2018-19 opening balance shows 1750 crores in Tier-II Bonds, but in the closing balance it has become zero, how and where was it spent is not listed.

His spending on the Relief Activities has been shamefully low.

Questions which we need answers for are:

There’s one page website, no idea if SARC associates will be the privileged auditors, not under RTI Act…what’s cooking?

Is India still a Democracy?

I have asked the questions but every one knows we will not get any answers.