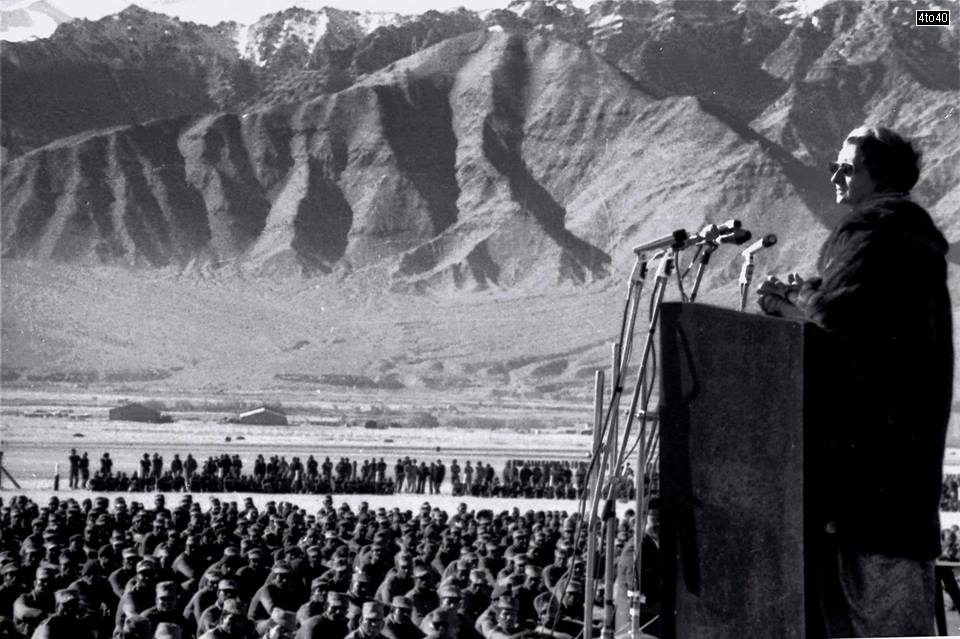 Summary
I Prime Minister Indira Gandhi showed her inability to back down in a fight and willingness to go for an all out war when the People’s Liberation Army launched an attack on Indian posts at Nathu La and Cho La.
II Author

Prime Minister Indira Gandhi showed her inability to back down in a fight and willingness to go for an all out war when the People’s Liberation Army launched an attack on Indian posts at Nathu La and Cho La.

The year was 1971. Infuriated by Prime Minister Indira Gandhi’s decision to liberate East Pakistan (now Bangladesh), Pakistan started preparing for a war with India. Both China and the United States, who considered Pakistan as a traditional ally, started supplying arms and ammunition to fight the Indian forces.

The subsequent victory of India and creation of Bangladesh has been etched in public memory but many don’t know that at that time India almost came to blows with the Chinese too who saw the war as India’s attempt to establish regional dominance.

By May 1971, it became clear Indian Army would enter East Pakistan any day. The Chinese, who never took it kindly, the fact that India was sheltering a large number of Tibetans who fled China’s communist party rule, saw it as a future threat to their sovereignty over Tibet.
There was a fear that an emboldened India would use the same justification to aim for the liberation of Tibet. The Chinese leaders felt an urgent need to beat down any such thoughts within the Indian establishment.

By the first week of June, India started a massive troop build-up operation along the western border with Pakistan. The People’s Liberation Army decided to put pressure on Indian Army positions along the Line of Actual Control, to deter them from attacking Pakistan.

Soon reports of ceasefire violation by Pakistan and incursions by the Chinese Army started coming from the state of Jammu & Kashmir (now divided into J&K and Ladakh).
With the threat from two sides, India’s effort to liberate Bangladesh started faltering. Prime Minister Indira Gandhi understood that Pakistan will not be alone when attacked by India.

Smt Indira Gandhi and Indian Army Chief Sam Manekshaw discussed the situation. Both felt a need to first let China know the cost of an attack on Indian soil. So that the communist republic just remains a spectator during an India-Pakistan War.
Temporarily halting operations along Pakistan borders, Indian troops started building up all along the Line of Actual Control.

The Dalai Lama too was encouraged to more actively seek Tibetan independence from China.
“Like primitive beings, each person in China lives perpetually in fear of retribution for the slightest mistake from his new ‘God’. Can such an institution hope to remain? I say no. Nearly every totalitarian regime in history had this in common – they never lasted long. Eventually, China has to give way or break.”, Dalai Lama said in a statement given in the summer of 1971.

The Chinese who initially never planned on a war with India, warned of grave consequences if the Indian government did not stop its provocative behaviour. The strategy to pressurize India was turning in to a potential war. Skirmishes started showing at several sectors in the Himalayas. A state of stalemate was coming up between Indian and Chinese forces.

Just four years ago in 1967, the Chinese had suffered defeat in the hands of Indian forces when the People’s Liberation Army launched an attack on Indian posts at Nathu La and Cho La. At that time too Prime Minister Indira Gandhi showed her inability to back down in a fight and willingness to go for an all-out war. Her provocative behavior at that time had a psychological impact on the Chinese.
However, the Indian Prime Minister didn’t felt satisfied enough that she has been able to put across her message of not to mess with India.

In the month of July, when tensions with China were high the Prime Minister decided to make a quiet visit to Ladakh. The PLA soldiers started posturing by establishing positions at the ridges rising above the Galwan Valley, the very same region where the latest clash occurred leading to the death of 20 Indian soldiers and capture of 10 Army jawans.
In a shocking display of bravado, the Prime Minister suddenly made a visit to the disputed site establishing India’s dominance over the valley.

After landing at Leh on 14 July 1971 Prime Minister made a decision to address Army jawans who were in a stand off-site in Galwan Valley.
The sudden visit shocked the Chinese who could witness see the Indian Prime Minister addressing the soldiers and motivating them to get ready for a big fight against the enemy.
The epic photo reached vast corners of India and as well as in China. Demoralised troops of China’s PLA started backing off from Galwan Valley and retreated 7 km within Chinese territory, in a clear indication to cool down tempers on the Indian side
With Indira Gandhi’s strong intention to go any length with China, made the Chinese leadership rethink on their strategy to pressurize India.

After a few weeks of Indira Gandhi’s visit to Ladakh, China demanded an immediate ceasefire with both China and Pakistan.
The Prime Minister while factually rejecting any ceasefire proposal with Pakistan, indicated to the Chinese that she was ready to reduce troops along the Himalayan border provided the Chinese guarantee that they will not interfere in a war with Pakistan.

With India building up fortified positions all along the LAC, the Chinese leadership decided to back down and leave the Galwan Valley for India.
By November, the Indian government went back towards focusing on liberating the Bengalis from West Pakistan’s rule.

By December 1971, hostilities between India and Pakistan resumed. Indian Army soon overran East Pakistan leading to the capture of more than 90,000 Pakistani soldiers.
The Indian campaign’s “blitzkrieg” techniques exploited weaknesses in the Pakistani positions and bypassed opposition; this resulted in a swift victory.

However, victory could not have been possible without the bravado that both India’s armed forces and the government showed at that time in subduing China. Throughout the war with Pakistan, China did not create further trouble for India and watched the war just like a mute spectator.