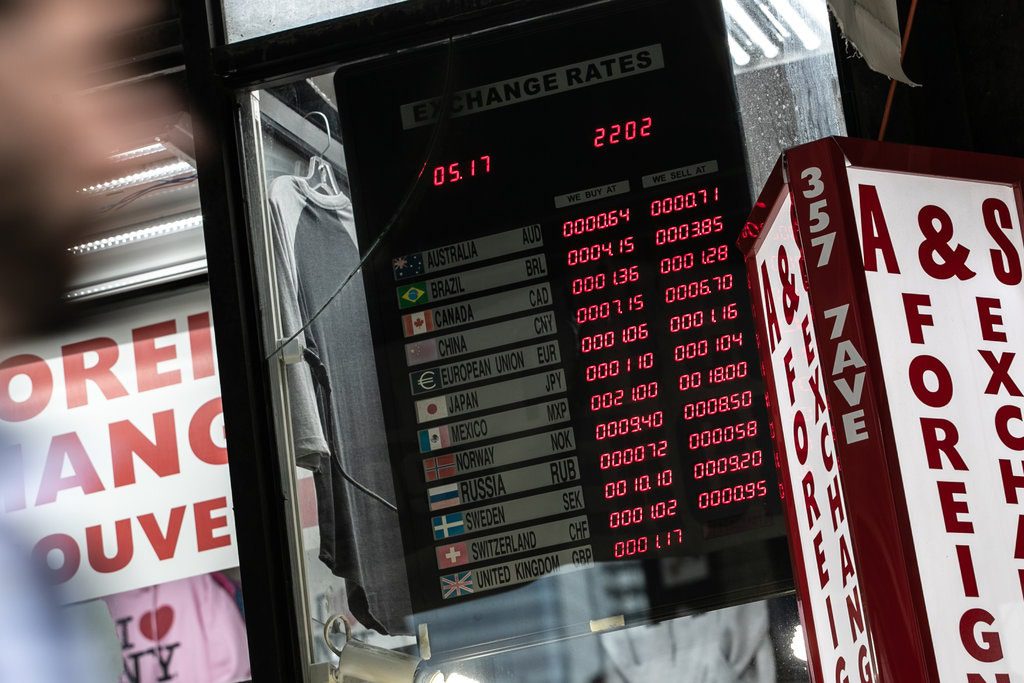 China may turn its currency into a weapon. It has already stopped buying American crops. Its mining industry stands ready to hold back minerals that are crucial to making iPhones and missiles, and its policymakers are openly discussing doing without American trade.

Nearing the end of a tumultuous week that left stock markets reeling, Beijing began to show how it would fight back against President Trump’s threats to impose new tariffs on virtually everything China ships to the United States. The options extend beyond taxing American goods, and could shake global supply chains and the world financial system.

Aside from a halt to agricultural purchases from the United States, other alternatives, like restricting exports of raw materials essential to advanced technology, remain threats. The two sides could still reach a truce of some sort before next month, when, Mr. Trump said, tariffs of 10 percent on an additional $300 billion a year in Chinese imports would take effect.

“The alternation of fights and talks is likely to become a normal status quo,” said Wang Yiming, the deputy director of the Development Research Center, a think tank affiliated with China’s State Council, or cabinet, in an interview published on state media.

“We need to be prepared for the trade war to last a long time,” Mr. Wang added.

Beijing has also tried to show restraint. The prospect that neither side would back down spooked investors at the start of the week. But financial markets grew calmer as the days passed after Chinese officials played down the likelihood that they would strike back at the United States by quickly devaluing the country’s currency, the renminbi.

China’s central bank did, for the second time this week, allow the value of the renminbi to cross a psychologically important point on Thursday, but the move was not as significant as some analysts had expected, and the currency’s value stabilized during the Asian trading day.

Officials in Beijing will “continue to maintain the continuity and stability of the foreign exchange management policy,” Wang Chunying, an economist and a spokeswoman for the State Administration of Foreign Exchange, told the Chinese state news agency Xinhua for an article published on Thursday.

She added that the Chinese government continued to “welcome global investors including the United States to invest in the allocation of renminbi assets.”

Investors’ concerns also eased after China reported trade data on Thursday that suggested its efforts to find customers in countries other than the United States was making progress. Overall exports grew unexpectedly in July from a year earlier, even as shipments to the United States continued to shrink. The challenge for China is whether it can sustain the growth.

Using the currency to retaliate against the United States — weaponizing it, as trade analysts say — would require Beijing to take much more drastic action: weakening its value to offset or even neutralize American tariffs.

China first allowed the renminbi to weaken past the level of 7 to the American dollar on Monday. On Thursday, it moved its official guidepost — around which the currency trades in a narrow range — past 7 as well, further ensuring the currency would stay in that range. The moves themselves were modest, but they raised the possibility that China could allow the renminbi to weaken in coming months.

A weaker currency helps Chinese companiesthat sell products to the United States. A Chinese company that sells a product for $10 there would reap roughly 70 renminbi in sales at current exchange rates. Should the renminbi fall to 7.7 to the dollar — a 10 percent drop — the same sale would fetch 80 renminbi, allowing the Chinese company to cut prices so that its product was more competitive.

That is where the American tariffs come into play. Weakening the renminbi 10 percent would essentially nullify a 10 percent tariff.

For Beijing, weaponizing the renminbi could be dangerous. A weakened currency could cause severe damage to Chinese companies that operate overseas and could dent the confidence of Chinese consumers. And the Trump administration could simply raise tariff levels in response.

Other countries could be pressured into devaluing their own currencies, further damaging global growth. On Wednesday, fears that the trade war could cause a wider slowdown helped prompt surprise interest rate cuts by central banks in India, New Zealand and Thailand. On Thursday, the Philippines’ central bank also cut rates, although the move was widely expected.

China has other options, and it is increasingly threatening to use them.

One of the most strategic trade weapons in Beijing’s arsenal is the ability to cut off key parts of the global supply chain in rare earth minerals. China is the dominant supplier of several such minerals that are key elements in, among other things, smartphones, light bulbs and semiconductors, and the industry that mines them appears to be gearing up for a fight.

A Chinese industry association representing rare earth companies issued a statement this week pledging to support any countermeasures that Beijing pursues in the trade war.

The group, the Association of China Rare Earth Industry, did not mention export restrictions in its statement. But it said it opposed “trade bullying behavior,” adding that “the cost of tariffs imposed by the United States should be borne by the U.S. market and consumers.”

More broadly, officials in several industries have begun to draft new measures to help stabilize China’s slowing economy, according to official state media. Officials were also considering revising catalogs of what China imports, potentially in a bid to move away from the country’s reliance on American goods. The report did not provide specifics.

China is facing a protracted economic slowdown. A long and difficult trade war with the United States will only further compound its own domestic pressures.

Still, Chinese officials have ramped up their strident tone. An editorial on Thursday in the People’s Daily, the Communist Party’s official newspaper, sharpened its tone and berated the United States for ignoring the needs of Americans and the interests of other countries. It warned that China would take necessary countermeasures.

“China is mobilizing internally to fight firmly with the U.S., and all official media is participating in the mobilization,” Hu Xijin, the editor of the Global Times, a nationalist Chinese tabloid, wrote on Twitter.