The story of India’s telecom’s crisis

The story of India’s telecom’s crisis 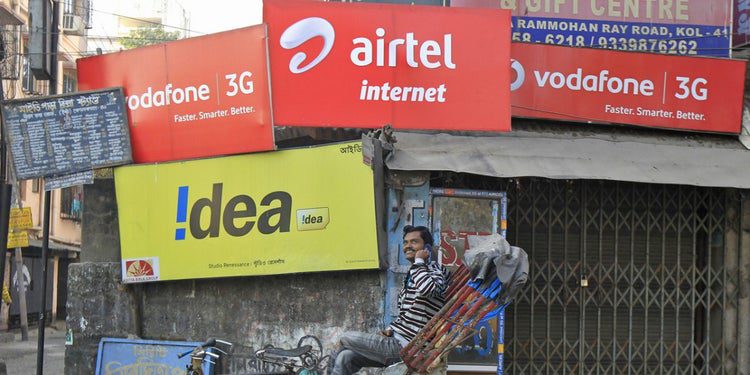 MUMBAI : The past two weeks have been a “nightmare”, says a top official at Vodafone Idea Ltd on condition of anonymity, with events changing every day—sometimes by the hour. This feverish pace of events is not surprising as the company is fighting a desperate battle for survival. The entire telecom value chain—from Vodafone Idea’s employees to its consumers; from its lenders to the competition—is waiting with bated breath for some resolution.

Vodafone Idea finds itself in this unenviable position after losing a 14-year legal battle in the Supreme Court in October last year against the department of telecommunications (DoT) over the definition of adjusted gross revenue (AGR) and regulatory payments linked to it. On 14 February, the Supreme Court rejected applications by telecom firms including Bharti Airtel Ltd and Tata Teleservices Ltd to defer paying these tax levies to the government.

Given the situation, the government has a big problem on its hands. At one level it cannot go against the Supreme Court, which has ordered that Vodafone Idea’s dues (estimated at ₹44,000 crore) be paid in full. At the same time, it’s almost certain that without a bailout Vodafone Idea will shut shop in India. And with memories of the 2018 collapse of non-bank lender Infrastructure Leasing and Financial Services Ltd still fresh, Vodafone Idea’s exit from the scene could well cause a crisis in India’s financial system.

The telecom company’s collapse would also impact government’s own revenues and set a precedent for future spectrum payments. It could also potentially lead to a duopoly of service providers (with state-owned Bharat Sanchar Nigam Ltd as a distant third market participant), which in turn can lead to higher mobile tariffs and stoke inflation.

That’s why the government is taking its time to work out a solution. “The government is serving three compulsions. Supreme Court compliance, keeping the health of the telecom sector intact and consumer interest,” said a top government official, requesting anonymity. Despite the call for urgent relief from the sector, the Digital Communications Commission, the highest decision-making authority at DoT, is yet to make a final decision, which once passed by the commission, would also need to be approved by the cabinet.

At this stage, there is a broad consensus within the government that Vodafone Idea will not be allowed to fail. While that should be reassuring for the company, the Vodafone Idea official quoted earlier says one can’t rule out “external influences” foiling these intentions. Clearly, there is yet to be a consensus on how exactly Vodafone Idea will be saved. Given these factors, what kind of package will the government serve up? And will the deal have implications for consumers and the competition?

Last week, DoT asked all operators to speed up their self-assessment of AGR dues and submit documents backing their calculation even after Bharti Airtel, Tata Teleservices and Vodafone Idea made partial payments. Airtel issued a statement over the weekend stating that is self-assessment puts its dues at ₹18,000 at most, which is about half the amount standing as dues in the government’s books.

The government is exploring the possibility of roping in third-party audit firms to reconcile dues payable by the telecom operators after differences emerged in individual calculations made by the government and the telcos, which was reported by Mint on 21 February.

Bailout options on the table include setting up a fund that will lend money to telcos at a concessional rate to repay their dues. Another option is of a revised payment plan, which will enable companies to defer payment of penalties and interests. The government is also mulling a proposal to issue soft loans to Vodafone Idea from the Universal Service Obligation Fund, which has a corpus of more than ₹50,000 crore.

However, there is also growing criticism that the government has whiled away far too much time, before finally waking up to the gravity of the task at hand.

“The DoT should have constituted an inter-ministerial panel immediately after the verdict. They were aware of the stress on companies which have been posting losses before the verdict also. They know that tariffs are very competitive. Too much time has been wasted since October till now,” said a former DoT official, requesting anonymity.

Vodafone Idea has also come in for criticism. “One area that Vodafone and Vodafone Idea could have handled more sensitively was their outreach to the government. They were aggressive in declaring that they’ll pull out of India if they don’t get relief,” said Amit Pau, former managing director of Vodafone, and chief operating officer at Accloud, a tech platform.

From bad to worse

A month before Reliance Jio Infocomm Ltd’s soft launch in December 2015, its leadership team was called for a briefing by parent Reliance Industries Ltd’s chairman Mukesh Ambani. It was already amply clear to everyone that Reliance Jio had already pulled off a coup in the hypercompetitive telecom market by securing government approval to provide voice telephony with its technologically superior 4G (fourth-generation) data service via a pan-India licence.

According to someone present at the meeting that day, the agenda was to ensure that nothing was left to chance. The message was clear: Jio would go on an all-out price war to gain market share at any cost. Fast forward to 2020, Ambani’s strategy is paying off handsomely. Jio is now the largest telecom company in both revenue and market share.

There is little doubt that Jio’s aggressive pricing strategy resulted in a collapse in industry revenues and profitability.

Three years hence, Vodafone Idea’s annual revenue and Ebitda have fallen to ₹44,978 crore and ₹5,210 crore, respectively. Ebitda has fallen about 80% and is far from enough to cover even interest costs. Average revenue per user (Arpu) has fallen from about ₹180 levels pre-Jio (in the case of Idea Cellular) to ₹109 for the merged company.

But as analysts at Kotak Institutional Equities pointed out in a note to clients last year, Vodafone Idea should take a fair share of the blame for its decline as well. It termed the company’s strategy as “play safe/conventional” with a tendency to hang on and hope for better times, while also pointing out a poor reading of consumer behaviour on the company’s part.

“We are particularly disappointed with the pace of capex deployment by VIL (Vodafone Idea Ltd). LTE network lags both R-Jio and Bharti on coverage as well as capacity and time is of utmost essence as VIL can ill afford to let the gap expand further,” Kotak’s analysts said in the note. LTE stands for Long-Term Evolution, a standard for wireless broadband communication.

And even with AGR dues to settle, critics argue that Vodafone Idea is in a “hang on and hope” mode, while competitor Bharti Airtel has managed to cough up the resources needed to clear the dues being demanded at the behest of the Supreme Court.

While the self-assessment principle may help to some extent, another hope is that the Supreme Court may still be open to modification of payment terms as proposed by the government.

Whatever shape the bailout takes, Vodafone Idea still needs a massive fund infusion. While it’s understandable that its promoters aren’t looking at putting in funds at this stage without clarity on the AGR matter, the fact remains the company will need cash.

Its network remains far inferior compared to Jio and Bharti Airtel, and given its cash constraints, investments in network enhancement have been minimal. Despite the tariff hikes in December 2019, the cash flow situation remains poor and an equity fund infusion will be critical to arrest market share decline, say analysts.

In November 2019, Vodafone Idea reported a decline of 36 million in its subscriber base. Its strategy places immense faith that a majority of subscribers will continue to “hang on and hope” that the company survives. As the churn in recent months shows, this cannot be taken for granted.

Since the merger in the second quarter of 2019, Vodafone Idea has lost 6.7 percentage points in market share. During the same period, Jio gained 9.2 percentage points and Bharti Airtel (including Tata Teleservices) 0.8 percentage points in market share. Vodafone Idea lost the maximum revenue market share in circles A and B, while Bharti Airtel ceded ground in metros and circle C, noted a report by SBICaps Securities Ltd. Circle A has the highest population base and commands the maximum Arpu across circles consisting of states with large cities like Maharashtra, Gujarat, Andhra Pradesh, Karnataka and Tamil Nadu.

In December last year, in a massive relief to Vodafone Idea, both Bharti Airtel and Reliance Jio raised prices of their prepaid voice and data services. They ended a protracted tariff war that had dragged rates to the lowest in the world.

The hikes in most plans announced by the three operators were in the range of 15-47%. What took most observers by surprise was the sudden change of heart on Jio’s part. According to people close to the deliberations, this was thanks to the nudging by top echelons in the government.

Vodafone Idea’s latest proposal to the government is for a floor price to be imposed on tariffs, which would ensure that the industry’s revenues double from current levels.If the government even partially agrees to this proposal, it would result in a huge accretion to profits and cash flows.

Any further hike in tariffs would be unpopular with consumers and the move could also face scrutiny from the Competition Commission of India. However, given the dire straits the industry is in, the government is clearly more open to such suggestions now than earlier.

The irony is that while a high floor price would improve Vodafone Idea’s prospects, it would also strengthen Jio and Bharti Airtel, who would become far more formidable competitors. Most analysts estimate that even if Vodafone Idea survives the AGR crisis, it will end up as a distant third in terms of market share, with Jio and Bharti Airtel expected to garner a lion’s share of the market.

Industry observers point to Vodafone Idea’s own internal issues as a contributory factor for the current mess. In January last year, Balesh Sharma who was appointed as chief executive (CEO) of the merged entity in August 2018, left the company. According to his former colleagues, Sharma’s appointment as CEO was meant to signal the fact that Vodafone Group Plc’s international expertise would take the lead in the merged company.

Sharma had worked in different positions within Vodafone Group for many years, and was called from the Czech Republic to India in April 2017 as chief operating officer to make sure that he became familiar with the Indian business before steering the combined entity. However, insiders say Sharma’s style of governance never quite met the same wavelength as Idea’s management.

Notably, both Aditya Birla Group and Vodafone Group have (for now, at least) ruled out any fresh equity infusion in the company. Incidentally, according to the shareholders’ agreement, both groups are required to reduce their minimum stake in the company to 21% from FY21. Given the current mess, those plans look unlikely.

Of course, this is not the first time the telecom industry has witnessed dramatic roadblocks. From the run-up to the National Telecom Policy in the 1990s, to the fixed line telephony controversy of 2001 and finally the 2G scam at the end of the last decade, the sector has survived it all. While industry insiders are hopeful that the current logjam will end soon, there’s no denying many feel the sector is running out of luck.