‘THE LOST BOYS’ by ORSON SCOTT CARD: The most sentimental horror novel I ever read.

‘THE LOST BOYS’ by ORSON SCOTT CARD: The most sentimental horror novel I ever read. 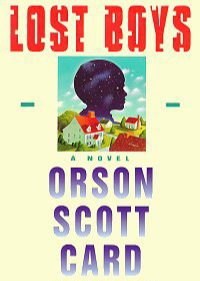 There are some stories that simply stick around you for the rest of your lives. You sincerely pray to God that let that be it! After twenty years of sticking around in your head, you’ve forgotten the finer details, but they keep returning in flashes. You are angry that you’ve got such a sharp memory that always prevents you of the simple pleasure of reading the same novel twice or watching the same movie twice with equal enthusiasm. Yes! there are books you keep reading and re-reading but then you almost flip through the pages wanting to get to that part which you really want to read. That’s not like feeling the thrill for the first time!

Anyway, when we speak of horror novels or horror movies, we all have a different genre in our minds. Almost none of the horror novels get their proper literary value, unless you’re speaking about ‘The Phantom of the Opera’ or ‘Dracula’. According to me, there are two kinds of horror works; the first kind is aimed at giving the reader/audience an ample amount of thrill (scope to get scared, so to say), and the second kind that doesn’t immediately immerse them into an ocean of fear, but gradually begins seeping into their very being, because of the amount of care and emotions that the creator has put into it. Think about ‘The Shining’ (both novel and movie) or about ‘Rosemary’s Baby’. The discomfort hangs in the air but is not evident at first. What begins like a tickle to your thumb gradually attains the magnitude of searing pain, and ends up draining you of your feelings, and leaving you numb. You wonder in the end: What is it that really happened? “Was Jack Torrance mad?” or better still, “What could a helpless woman like Rosemary really do?”.

That is what is beautiful about all great literary works; they are full of sentiments and are capable of twinging you to the right level of emotions, at exactly the same point where the creator wanted. Such perfection can’t be attained by practice unless you yourself invest so much of your emotions into your work. It is the creator’s feelings that touch the readers/audience. Passion echoes passion.

For those who’ve probably been thinking what’s wrong with me because I’ve not even touched Orson Scott Card or his novel yet, and have already written more than four hundred words: the premise was very necessary to dissect this piece of work, that is nothing short of a classic and is taut with tension right from the first word. The author builds an atmosphere that gradually engulfs you and takes you back to early 1980s Steuben, when Atari was still in vogue and games like Rodeo were yet to come. The plot builds with a scenic description of an otherwise nondescript sexual scene between a husband and wife, seen through the eyes of their son. You start getting your first chills of anticipation straightaway; after all, the child couldn’t have been old enough to decipher what was happening, and yet was enthralled and revolted in equal measures by what he’d seen.

Fast forward to the 1980s. Enter a family of father, mother who’s pregnant with their fourth child, and three older children: Stevie who is seven, Robbie who is four and Elizabeth who is two. A number of characters are introduced gradually, most of them having a few more shades of grey than desired. Whatever each of them appears to be, no longer holds true as the novel progresses. The father has a hard time juggling between his work of programming a new computer game, dealing with Stevie’s supposed psychosis involving his horde of imaginary friends, a lousy boss, a pedophile, a sadistic school teacher, regular pest invasion of their rented house among other problems. You can feel the foreboding and suspense, but can’t quite place a finger on it.

What is conspicuous throughout the novel is the fact that you can feel Orson Scott Card speaking through the character of the father. His emotions are so real, and each word is loaded with so much of it that you could almost reach out through the pages and lend a shoulder to him. The raw vulnerability is rife with a paraphernalia of sentiments. The paper barrier dissolves with the magnanimity of such heart-touching story telling skills.

When you leaf through the last pages, and skim through the concluding words, you realize the actual element of horror, because you can relate to the situation, as a human being, as a brother, father, or son…. You can feel the gnawing sense of insecurity grasp you and toss you like a kite in the face of storm. Without giving away the staggering ending, I’d just suggest that take up the book and let yourself be blown away by the gamut of emotions…