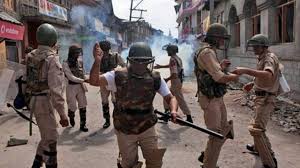 The terrorists are constantly targeting paramilitary personnel after being killed in the ongoing anti-terror operations in Jammu and Kashmir. There have been two major incidents of terrorist attack in Kashmir Valley on Wednesday.

In Nauhatta, located in the down town of Srinagar, militants attacked a grenade on the personnel of the armed border force on Wednesday evening. Five security personnel were injured in this attack. Apart from this, militants have opened fire on a local citizen in Handwara in Kupwara district.

According to the information received, the terrorists attacked the grenade on a check post near Nauhatta Chowk located in the down town of Srinagar on Wednesday evening. Four armed forces personnel and a policeman on security duty were injured in this attack.

Large search operation of army in the area
After this incident, teams of Army Rashtriya Rifles, Jammu and Kashmir Police and CRPF were sent to the spot issuing an alert in the area. The team of soldiers arrived after the attack started a major search operation in this area.

Injured jawan hospitalized
SSP Haseeb Mughal of Srinagar said that the injured soldiers have been admitted to the hospital and the condition of all is stable. At the same time, police and army teams have started a large search operation to search for terrorists.