review of Sanjivani : The medical drama returns with emotions intact as Namit Khanna saves a life with a bit of jugaad

review of Sanjivani : The medical drama returns with emotions intact as Namit Khanna saves a life with a bit of jugaad 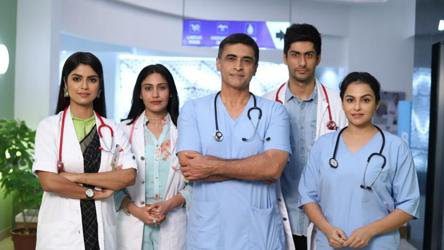 Popular medical drama Sanjivani is back after 17 years and it wins hearts from the word go, or to quote the show’s popular Dr Shashank, “Some things don’t need to be updated”. Actor Mohnish Bahl returns as Shashank and his entry in Sanjivani is reminiscent of Shah Rukh Khan’s melodious arrival in Kabhi Khushi Kabhie Gham.The man is loved but a generation has changed — of both the actors and the audience, and Namit Khanna and Surbhi Chandna promise to do justice to the show’s reputation in the first glimpse itself.

The first episode begins with a flirty Dr Siddhant Mathur (Namit) going down on a knee for a girl he spent the night with, but struggles to recall her name. He sees the reflection of a boy drowning in a river in her shades and runs to save his life. To underline that he’s the hero, he first takes off his shirt to show his chiselled abs. One easily forgives his typical Bollywood style as the crisply edited show moves ahead with a convincing storyline minus superficial drama. What follows is a trial of his first-aid abilities as he manages to revive the child by using his girlfriend’s plastic necklace to make a vent in the child’s throat. While it’s the money that saves the rich, it’s the ‘jugaad’ that is needed to save the poor. On learning of the child’s critical condition, he speed dials air ambulance, claiming it’s the home minister’s son who needs immediate care. However, he leaves him unattended in the hospital as he goes out looking for resources to fund his treatment.

You sense trouble as by-the-rule Dr Ishaani (Surbhi) steps in. She immediately comes to the rescue of the critical child and saves him with her quick thinking for the moment. However, a doctor, who would call the police if dry waste is wrongly disposed — seems to have issues of her own. There seems to be more to her other than just her resolve to not shake hands due to hygiene issues. Amid all this, one character that deserves a special mention is Dr Asha Kanwar (Rashmi Singh), who adds a pinch of spice to this otherwise sincere medical drama with her peculiar accent and her guts to bully a 1st year resident doctor despite being a fresher herself. Sanjivani – the perfect hospital which is setting of the soap — is run by two kinds of people. On one hand, Mohnish’s Dr Shashank believes in running the hospital with the help of government funding and donations rather than commercialization. He is up against Rohit Roy’s financial officer whose rule is – no fee, no treatment. But Sanjivani may not always be in safe hands as Dr Shashank gears up to step down from his position as he is diagnosed with brain tumour.

As the life of the poor kid continues to flicker between hope and despair, he breaks all hearts by disclosing the address of his piggy bank while lying in the operation theatre. Will he be saved by Namit’s jugaad or Dr Shashank’s timely interference? Or will he eventually succumb to the disadvantages of being a poor. Since the show has its heart in the right place, there is little possibility of letting a life go waste at Sanjivani. This one surely tugs at our heartstrings.