Education Minister Ramesh Pokhriyal ‘Nishank’ on Saturday approved the Performance Grading Index (PGI) 2019-20 for States and Union Territories (UTs) in which Punjab, Chandigarh, Tamil Nadu, Andaman and Nicobar Islands, and Kerala have got the highest grade of I++.

The major purpose of PGI is indeed to create an environment that nudges States/UTs to continuously improve its performance, the minister said. “Finally, I’m happy to share that Nineteen States and UTs have shown improvement by 10%(36 points) or more in the PGI domain:Governance Process. Andaman & Nicobar Islands, Andhra Pradesh, Arunachal Pradesh, Manipur, Punjab, Rajasthan & West Bengal show improvement by at least 20%.”, he said.

Punjab has not only scored maximum points for governance and management, but has also shown improvement by at least 20 percent points.

The Chief Minister of Punjab Captain Amrinder Singh  congratulated the teachers, officials and other employees of the Education Department for their hard work to bring the state on the top of the grading index which has been released by the Education Ministry Of India

Punjab CM wrote : Happy to share that Punjab has been ranked as top performer among all states & UT’s in school education in the Performance Grading Index 2019 – 20 released by Education Ministry Of India, This is  the result of focus, Hard Work & Commitment of all our teachers and Administrators.

What Education Minister of Punjab Has to say?

Congratulating the Department, Punjab School Education Minister Vijay Inder Singla on Sunday said that it was the result of sustained and concentrated efforts of the Congress led State Government that Punjab has clinched the top position.

Singla said that immediately after the formation of the government in 2017, the Chief Minister has not only taken new initiatives but also introduced several reforms

The smart school policy, online teacher transfer policy, direct recruitment of administrator level posts through PPSC, introduction of pre-primary classes, recruitment of teachers, online education and distribution of free smartphones under Punjab Smart Connect scheme have become the base of the improvement in the level of education in the schools.

Children’s education is constantly being affected in the Corona epidemic. It is being replenished through online classes. But due to lack of smartphones and laptops with students, it is not possible to take online class. Meanwhile, the Punjab government has given huge relief to the students by distributing smart Phones to the students of 11th and 12th to Join the online classes.

Singla further said that apart from the new initiatives and reforms introduced by the Congress government, the teachers and officials of the Education Department have also worked very hard to bring the state on the top in the field of school education.

Performance Grading Index 2019-20 which is designed to catalyse transformational change in the field of school education. In PGI, states are scored on a total of 1,000 points across 70 parameters, including access, infrastructure, equity and learning outcomes.

State-wise performance in PGI 2019-20 shows that 33 States and UTs have improved their PGI scores in 2019-20 compared to the previous year.

Last year, the top bracket (or Grade I++) was occupied by Chandigarh, Gujarat and Kerala. In the latest edition, Gujarat has slipped to the second bracket (Grade I+), which is also occupied by Haryana, Maharashtra, Delhi, Rajasthan, Puducherry and Dadra and Nagar Haveli.

Andaman & Nicobar Islands, Arunachal Pradesh, Manipur, Puducherry, Punjab and Tamil Nadu have improved their overall PGI score by 10% or more. Performance of a State/UT is often perceived to be linked to the geographical area as it has a bearing on several logistic, administrative and other issues. However, size does not appear to be a determining factor in the field of School Education.

The main purpose of PGI is to make all the States and UTs aware of the areas where there is scope for improvement.The difference between the maximum and minimum PGI scores is more than 380 points in yr 2019-20.

On a maximum possible of 1000 points, the range between the states and UTs with the highest and the lowest score is 384, which is 38% of the maximum points. Thus there exists a considerable difference within the states and UTs as far as their performance in the arena of school education is concerned as assessed by PGI 2019 – 20. 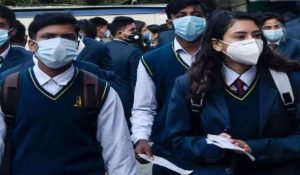 What about CBSE Board Practicals? Will they be Cancelled too?