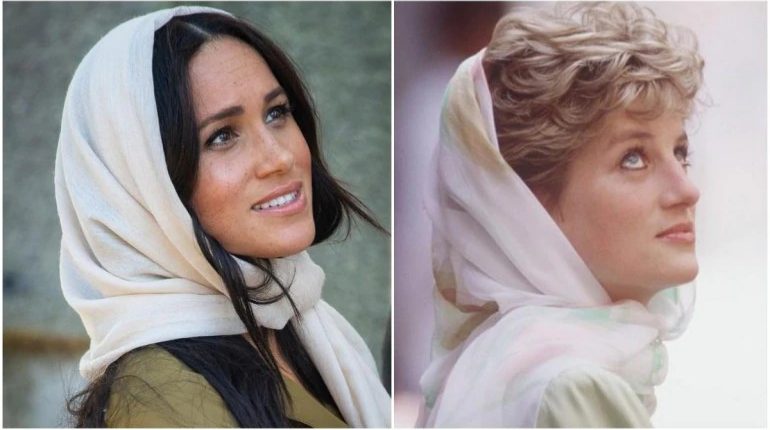 Meghan Markle and Prince Harry are currently on a Royal Tour in Cape Town and the pictures of the couple are already breaking the internet. As part of their visit, the Royal couple celebrated Heritage Day in Bo Kaap with the locals.

During their visit there, the Duke and Duchess of Sussex also visited the Auwal Mosque, the first and oldest Mosque in South Africa. And one particular moment from the visit has the world emotional.

During their visit, Meghan wore a cream head scarf and a long khakhi green dress at the mosque in Cape Town, and the Duchess reminded us of Princess Diana.

More images from Heritage Day in Bo Kaap. As part of their visit, Their Royal Highnesses visited the Auwal Mosque – the first and oldest Mosque in South Africa. Standing as a symbol of the freedom of former slaves to worship, the Mosque hosts events with Muslim, Christian and Jewish young leaders, and encourages friendship and understanding between South Africa's varied communities. The Duke and Duchess also got to view the first known manuscript of the Qu’ran in Africa, drafted by Tuan Guru from memory, whilst he was imprisoned on Robben Island. ••• Heritage Day celebrated the great diversity of cultures, beliefs and traditions that make up the rainbow nation. Bo Kaap streets filled with colour and music while Their Royal Highnesses were welcomed to one of the most vibrant neighbourhoods in Cape Town. The area has seen inter-community tension rise over the last few years, yet days like today show how faith, traditions, food and music bring people together, and celebrate the things that unite each and every one of us. #RoyalVisitSouthAfrica • Photo ©️ Shutterstock / PA images

Wearing the headscarf, Meghan evoked memories of the People’s Princess wearing a headscarf, when she went to Egypt and the Badshahi Mosque in Lahore, Pakistan, in 1991. Pictures comparing the two Royal ladies started flooding social media and conjured memories of Diana. Meghan wore a headscarf in public for the first time, as she and her husband visited the mosque.

However, this was not the only moment where Meghan paid a sweet tribute to Harry’s mother. Meghan managed to pay another tribute to her mother-in-law.

As she was pictured coming down the plane holding her 4-month-old son Archie, the Royal’s baby boy was spotted wearing a white knit hat with a festive pom-pom at the airport.

The Duke and Duchess of Sussex with baby Archie arrived in Cape town international airport on their first tour as a family. Baby Archie wearing the same hat to his

The same hat was worn by baby Harry in January 1985 as he snuggled in the arms of mom Diana at Aberdeen Airport in Scotland. Harry was also four months old back then.

Harry and Meghan kicked off the Royal tour on Monday with a stop in the Nyanga township of Cape Town.