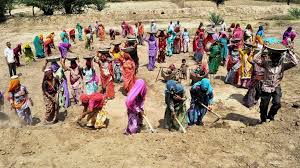 MNREGA schems provides just about Rs. 1675  per month for people in UP. In Bihar, a MNREGA worker gets about Rs. 1500 per month.

The MNREGA scheme that we are working on for employment in the villages, for the laborers who came to their home after being trapped in the tragedy of Corona virus lockdown, is not going to work much for them.  There are so many screws in the rules of giving employment in MGNREGA that a family working under it will get only 20,100 rupees in a year. Do you expect that in this era of inflation, a family will run for a month for just Rs 1675? Some people sitting in cities may think that employment in MGNREGA means work throughout the year. But actually it is not so.

After leaving work due to Corona virus, millions of working people have reached their villages. Governments have shown the vegetable of making MNREGA job card to the people who want to work. Registration has also started. But we are explaining to you how much you will get.

Under this scheme, every rural household whose adult member is willing to do unskilled work in a financial year is provided at least a hundred days of work. Vinod Anand, who was once associated with this scheme, says that the guarantee is 100 days but not all workers get employment for so many days. Even if you get employment, it is not regular. There is a need to increase wages and working days.

Job cards will be made for people who have reached home from Delhi, Mumbai or any other city. But would he like to work in Bihar for a mere Rs 19,100 and in UP for Rs 20,100 a year. That too when you can get work for 51 days only.

How much money will I get?

In view of the lockdown, the central government has increased its wages by Rs 20 per day from April 1. After increased wages, Haryana will get maximum Rs 304.

For whom is this scheme?

This state will get maximum employment

Chhattisgarh will get maximum number of jobs under MNREGA. Here, the government has given employment guarantee of 150 days in a year. The expenses of the increased 50 working days will be borne by the state government itself. While the remaining 100 days will be given by the central government. Any state can take such a decision.

That’s how you get money

A village head of Gorakhpur, Arjun Maurya told that now the money goes directly to the bank account of the laborer. Before work, the work is done (with the workers) and after the work completes, the photos have to be downloaded on the app.

Demand to link MNREGA with agriculture

Chaudhary Pushpendra Singh, a knowledgeable person of rural economy, says that if this scheme is combined with agricultural work, many problems will be solved simultaneously. The wages of MNREGA workers should be increased to Rs 300 for the agricultural sector.

Budget is low, how will people from cities get work

Pushpendra Singh says that its budget is Rs 61,500 crore in 2020-21, whereas in the last financial year 71 thousand crore was spent on it. Now Jog people have come to the villages from the cities, if they had to provide employment to 10 crore people, then on adding an average of 20 thousand rupees per annum, its budget will have to be made of 2 lakh crores. Will the government do this?