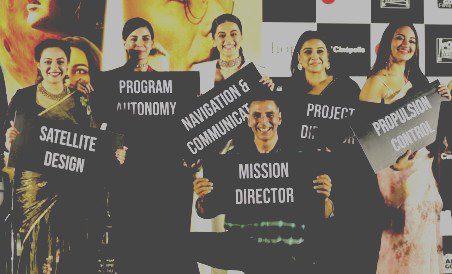 In the era of Instagram feeds and WhatsApp forwards, space seems to be the flavour of the season. The 50th anniversary of the moon landing, India’s second mission to the moon and Bollywood’s imminent entry into the space age, all seem to have converged, and are setting tongues wagging.

The Chandrayaan-2 mission – first aborted and now rescheduled – has given an opportunity to bring back into focus India’s achievements in space, particularly ‘deep space’ projects, and the involvement of women scientists on these missions. The trailer of multi-starrer Mission Mangal released this week seems to be adding a dash of glamour and masala to this discourse.

The movie claims to be the cinematic portrayal of India’s first mission to Mars, officially known as the Mars Orbiter Mission or MOM, which was globally hailed as one of the most cost-effective inter-planetary missions, and became the only one to be successful in its very first attempt. The picture of a group of saree-clad scientists celebrating the successful insertion of the Indian satellite into the Martian orbit had caught public attention, and that appears to have inspired this film. At least, the official trailer and posters seem to suggest this.

If the film promises to be what is shown in the trailer, then space enthusiasts and ISRO scientists (to whom it has been dedicated) will be in for a shock. It portrays both the space agency and its time-tested technology management practices in poor light.

It appears that the hero-scientist-engineer, Akshay Kumar, is all powerful in the space agency and can take key scientific and technical decisions on his own.

Of course, he is also blamed solely for the failure of an earlier mission. Nothing can be farther from the truth, if the movie is about ISRO and its missions.

In the real world, the space agency has well-oiled procedures and protocols for taking decisions concerning the choice of technology, design, and configuration of satellites and rockets, scientific objectives and payloads of specific missions – and an elaborate procedure for failure assessment. The success of ISRO lies in the rigour with which decisions are taken through team work, consultation and external review. Blaming one person for a failure or success is certainly not the ISRO way.

The most devastating part of the trailer is the sequence in which Akshay Kumar (mission director) enters a meeting (perhaps of a technical review board?) along with Vidya Balan (project director) with a gas cylinder and all kitchen paraphernalia, and Balan starts frying puris.

Actually Fry ‘Puris’ In The Boardroom?

Why? To convince the experts/officials that fuel for the mission to Mars can be optimised, just as puris can be fried with even the gas switched off, after the oil is heated up. Then the hero says: ‘is home science ki takneek se ham Mars tak jayenge,’ even as Project Director Balan is seen making puris with full concentration, and serving board members.

Akshay Kumar has thus killed two birds in just one sequence – showing that cost-effectiveness of India’s Mars mission was a result of jugaad, and that women (even when they are scientists and engineers) are masters in so-called ‘home science’. Both ISRO’s mastery over rocketry and gender balance can take a walk.

The man, Akshay Kumar, seems to be incharge of everything that matters – from getting funding to putting together teams, and finally giving the go-ahead for the launch. ISRO does NOT work like this. Each project is headed by a project director and assisted by a number of deputy project directors for delivering each of the subsystems (satellite, payloads, launch vehicle etc.), and backed by the project management office and project management board.

All deputy directors are assisted by dozens of teams. Every technical decision is taken collectively, including the launch, for which the go-ahead is given by the Launch Authorisation Board.

More than the hierarchy, it is the depiction of women scientists and engineers that matters.

They can be role models to millions of young girls across the country, and inspire young generations to take up science and engineering. But can we expect this from Mission Mangal?