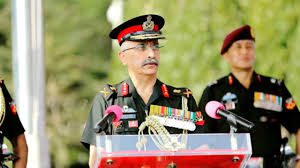 On the one hand, while the whole world including India is busy in the war against Corona, on the other side it is Pakistan which is not deterring its nefarious antics in this hour of crisis and is constantly making efforts to infiltrate terrorists in India.

Army chief Manoj Mukund Narwane lashed out at Pakistan for terrorist activities from across the border for some time and said that in this era of crisis, we are helping by sending medical teams and medicines all over the world, but Pakistan is exporting terrorism.

Army Chief Narwane told news agency ANI in Kupwara, Jammu and Kashmir  that at the time when we are helping not only the people of our country but also people of other countries by sending medical teams, medicines, at that time Pakistan is just exporting terror. Used to be. that is not good.’

The Army Chief reiterated the need to be prepared to fight challenges at all times. He said that General Narwane praised all the government departments for maintaining peace and vigilance in the valley and for raising awareness among the people to prevent the spread of Kovid-19. General Narwane also met the doctors and nurses of the Army’s 92 Base Hospital and praised the work being done by them.

Army Chief is on a visit to Kashmir valley and has been reviewing law and order situation there.