How to Stop Alienation of Indian Muslims : Justice Sachar’s Way

How to Stop Alienation of Indian Muslims : Justice Sachar’s Way 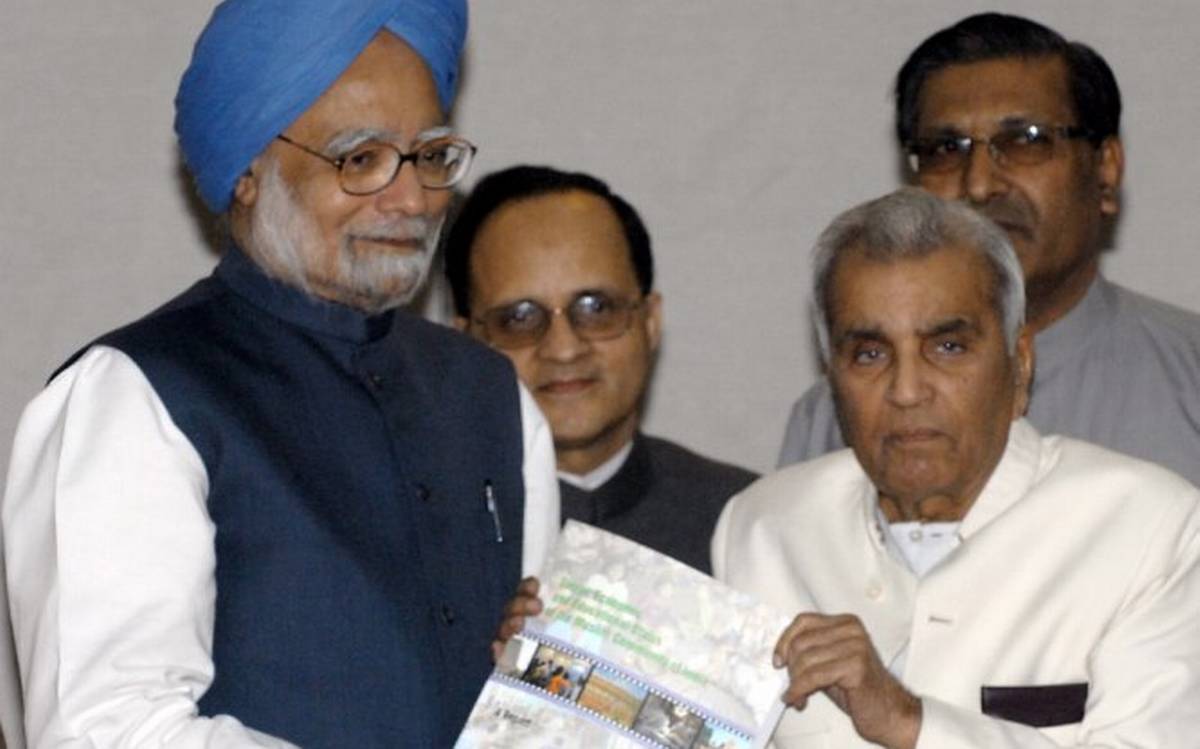 The second death anniversary of Justice Rajinder Sachar falls on 20 April 2020. On this solemn occasion, as we remember him, it is necessary to understand that his concerns about the ever-increasing alienation of Muslims in Indian society were very deep.

Apart from being concerned, he also had a keen grasp of this complex problem. He always considered this problem as a modern Indian citizen. Recognizing the prevailing emotional attitudes about the problem as insufficient, he was desirous of concrete and enduring solutions. It is still unfathomable to me as to why Prime Minister Dr. Manmohan Singh chose Justice Sachar to prepare a detailed report on the socio-economic-educational situation of the country’s largest minority community? Because as a committed Lohiaite-Socialist, Justice Sachar was a staunch opponent of the New Economic Policies of Dr. Manmohan Singh. Justice Sachar was the former Chief Justice of Delhi High Court. But, then, many sitting and retired judges of Supreme Court and High Courts were available whose services could very well have been utilized by then Prime Minister for this task.

Perhaps it was the intention of the Prime Minister that the reality of the socio-economic-educational status of Muslims should be brought to the knowledge of the country and its countrymen. He might have thought that only then could the Muslims be included in further development under the New Economic Policies! But despite the grim findings of reality of socio-economic-educational life of Muslims by the Sachar Committee, the Congress did not show the necessary willingness to implement the recommendations of the report properly. (Rather, Prime Minister Manmohan Singh paradoxically gave a statement that ‘the first right over the resources of the country is that of the minorities’, allowing the Bharatiya Janata Party (BJP), which was already strongly opposed to the report, to create unnecessary controversy. The statement happened to be paradoxical because Manmohan Singh, being the pioneer of New Economic Policies, had (in reality) ensured the first right of corporate houses and multinational companies on the resources of the country.) The so-called secular parties, who had stripped the Congress of its ‘Muslim vote bank’, also did not implement the recommendations of the report seriously. If these recommendations had been implemented, perhaps the current horrific level of alienation of Muslim society would not have occurred.

The 7-member High-Level Committee of the Prime Minister was constituted on 5 March 2005 under the chairmanship of Justice Sachar. The committee completed the work within the stipulated time and submitted a report of 403 pages to the government, which was released in the Parliament on 30 December 2006. The entire report was prepared on the basis of statistics received from various sources of the central and the state governments. What is noteworthy about this report is that it does not merely present statistics, but is also an exposition of certain guiding principles of what constitute a civil society in the modern world. As soon as the facts, conclusions and recommendations given in the report came to light, Justice Sachar’s name became famous in the whole country. However, he always credited the report to the entire committee and always kept himself away from the seminars and discussions which were held on the report. It was only obvious  that Justice Sachar became a house hold name in entire Muslim community and began to be looked upon with respect and a sense of gratefulness. Large and small Muslim organizations and individuals showed eagerness to invite their ‘messiah‘ to various programs, to listen his talks, and to be photographed with him.

It is well known that Justice Sachar played an active role in promoting civil liberties/rights. He had a central role in the functioning of the People’s Union for Civil Liberties (PUCL), founded by socialist stalwart Jayaprakash Narayan (JP). His active involvement in various ongoing struggles at that time to bring justice to the oppressed groups is also well known. Furthermore, he was a compulsory attendee in programs associated with the socialist movement. The office of a judge in India is often associated with privilege and instills a sense of terror in others. Justice Sachar was a judge whose father had been a senior Congress leader and the first Chief Minister of Punjab. But Justice Sachar, an unassuming personality, was considered readily accessible to all. He did not know how to distinguish big and small on the basis of one’s rank and economic status. He was a true socialist in this matter. After the Sachar Committee report, his busy itinerary also included a series of meetings with organizations and people belonging to the Muslim community, a routine which continued till his death. I have been with him on many such occasions.

There’s a particular statement which he often used to say to Muslim youth that the work of the committee was to submit a report. It is now their job to get its recommendations implemented. He used to urge them that it would be better to work with the central and the state governments in order to implement the recommendations of the report in a planned way instead of calling him in the meetings-seminars on the report. He would further suggest them to create awareness among the boys and girls, men and women as they were supposed to be the real beneficiaries of the recommendations. Justice Sachar believed that the most effective way to reduce the alienation of Muslim society is to have their proper representation in education, administration, business and politics i.e. the national life of India. But despite his repeated advice, not a single Muslim organization has been formed in the country till date that works for the purpose of implementing the recommendations of the Sachar Committee report. Just as political leaders and parties created a ruckus about the report, but did not do concrete work to implement its recommendations, similarly Muslim organizations/individuals did not play any concrete role in that direction.

The PUCL, Socialist Yuvjan Sabha (SYS) and Khudai Khidmatgar organized a one-day discussion in Delhi on December 22 (which is also Justice Sachar’s birthday), 2016 to mark the ten years of the Sachar Committee report. Justice Sachar himself was present as an audience in the program. The discussion was attended by Maulana Mahmood Madani, general secretary of Zamiat Ulama-I-Hind and Dr. Mohammad Salim Engineer, general secretary of Zamat-I-Islami Hind, besides many scholars and committee members. Syed Mahmood Zafar, who was OSD on behalf of the government in the committee, in his lecture explained in detail that even after 10 years, the recommendations of the report have been neglected. Regarding the resolution to be passed at the end of the debate, I sought suggestions from Justice Sachar that which two recommendations of the report he would like to insist on implementing. He suggested, firstly, amongst the various recommendations, the Prime Minister’s High Level Committee Report had recommended the establishment of Equal Opportunity Commission (EOC) as an instrument to prevent discrimination against minorities in the private sector like housing, employment. The EOC can be set up by the state governments without taking permission from the Central government. Hence this seminar should resolve that the present state governments run by secular parties should immediately establish the EOC in their respective states. Secondly, an extremely important recommendation of the report dealt with the unfairness inherent in the divisions of electoral constituencies which results in lesser number of Muslims getting elected in the legislature to which they are broadly entitled based on the population. This anomaly, to some extent, arises from the irrational demarcation of seats in the legislature. The constituencies with substantial number of Muslims have been reserved for S.C., and constituencies with substantial number of S.C. voters are unreserved. This is unfair to both Muslims and S.C. electorate. The Committee had hoped that it would receive the attention of the Government immediately because the Delimitation Commission was at that time engaged in this exercise and evidently any suggestion or any exercise to be done by it had to be undertaken during the current term of the then Delimitation Commission. But nothing had been done in this regard. Therefore, he would suggest that this seminar should resolve for a concrete action to remove this anomaly. The resolution was released in the public domain and sent directly to the governments of the states ruled by non-BJP parties. But no state government took the initiative in setting up Equal Opportunity Commission even after 10 years of the report.

Discussion about the Sachar Committee report has completely disappeared from the political and intellectual discourse of the country. In the last Lok Sabha election, not a single party of mainstream politics mentioned the recommendations of the Sachar Committee in its manifesto. Most leaders and parties have laid down arms in front of the communal fascist tactics of Modi-Shah. The Muslim leadership also does not allude to any concern about the non-implementation of Sachar Committee recommendations. Factors such as the subversive politics of corporate-communal nexus, the Citizenship Amendment Act, (CAA) National Register of Citizenship (NRC), National Population Register (NPR) and now Tablighi Zamaat episode have put Muslim society in a state of extreme alienation. As stated above, if the socio-economic-educational segregation had been bridged to some extent by implementing the Sachar Committee recommendations, the Muslim society might not have fallen victim to such religious alienation. For this, not only the leaders and governments who engage in hypocrisy when it comes to minority interest are responsible, the political-religious and intellectual leadership of Muslims is equally responsible.

While remembering Justice Sachar on his second death anniversary, it becomes a duty that all the citizens of the country, including Muslims and especially the youth, resolve to break away from caste and religious mobilizations in order to make a truly constitutional ‘socialist, secular and democratic’ Indian nation. It is high time for the resurgence of the Sachar Committee’s findings and recommendations in academic and political discourse so that minority communities including Muslims in the country are relieved of the agony of alienation.