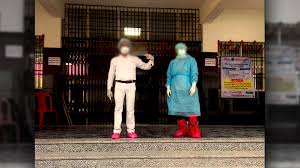 The confirmation of the presence of four corona positive patients in Bhagalpur was confirmed on Wednesday. One of them is a student studying PG in Mayaganj Hospital, while three belong to three blocks of the district. Apart from this, another person from Banka district was found to be a corona victim.

Of these, three have been admitted to Mayaganj Hospital, while two have been appointed by the Health and District Administration teams to get them admitted. Among the patients found corona positive, a 19-year-old woman resident of Bihpur was sampled at Navagachiya Hospital on Monday. While a 33-year-old PG second-year student, a 40-year-old man from Sikanderpur, a 46-year-old resident of Mahiyama Sanhola and a 45-year-old resident of Amarpur region of Banka district, were taken on Monday at Mayaganj Hospital.

Civil surgeon Dr. Vijay Kumar Singh said that the report of the five came on Wednesday, in which corona was confirmed to be positive. Of these, corona positive patients of Sikanderpur, Banka and Sanhola are admitted since the time of taking samples. In charge of MCH Corona Isolation Ward, Dr. Hemashankar Sharma said that PG students found corona positive have been asked to be admitted. He said that a corona positive has been found in Godda district, which has been admitted to the MCH corona ward.