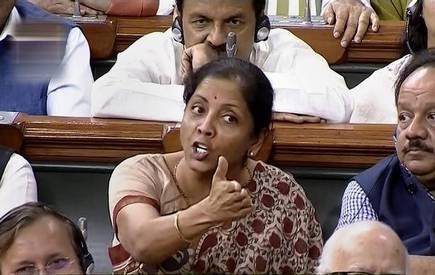 Azam Khan should be punished for his sexist comments in parliament, the ruling BJP said today as lawmakers across political lines criticised the remarks made yesterday by the Samajwadi Party leader during a debate.

“This is an abominable act, I appeal to you for exemplary action,” said Finance Minister Nirmala Sitharaman to Speaker Om Prakash Birla in the Lok Sabha.

After several demands from across the floor of the Lok Sabha, the Speaker said: “I will hold meeting with leaders of all parties and then take a decision.”

Yesterday, during a debate on a bill to criminalise Triple Talaq or instant divorce, BJP lawmaker Rama Devi, officiating as Speaker, had asked Azam Khan to address the Chair while making his point.

The Samajwadi lawmaker had responded with out-of-line comments that were slammed as sexist and offensive and provoked shouts of “shame” from the government benches.

Later, he attempted to clarify, saying: “You are my sister, bahut pyari behen (very sweet sister). I have had a long political career, it is not possible for me to say anything bad. If there is a single unparliamentary word in what I said, then I declare my resignation from parliament.”