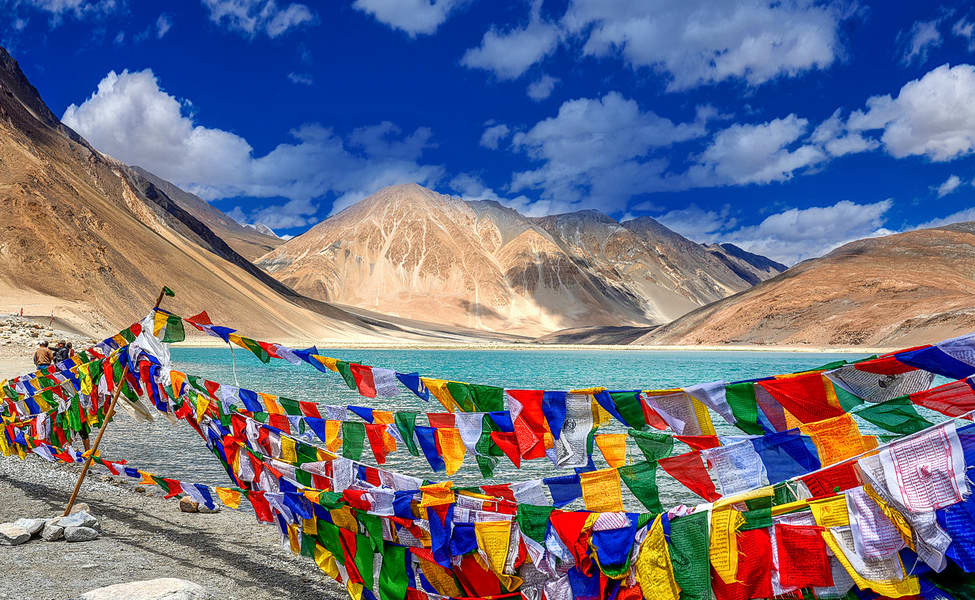 On an eroded shelf a hundred metres above the Zanskar River in Ladakh stands a snow leopard, profiled against the bronzed patina of a polished boulder. The stylized form of its body is instantly recognizable, as is the pattern of spots on its coat and the long tail that curves behind. Crouching, I study the ancient artistry of this figure that has remained unchanged for thousands of years, a timeless image baked by the sun and buffed by wind. Harsh winters and the fast-flowing streams and rivers of Ladakh have scarred the mountains all around us, but the snow leopard (Panthera uncia) remains unscathed. He watches me with a stony demeanour, alert to danger yet equally attentive to the presence of prey.

On another cluster of rocks nearby, a herd of ibex with long, arching horns and fleet hooves escape the arrows from a hunter’s bow. They seem to race across the burnished, undulating surface. The animals on display exhibit a primitive beauty that underscores their antiquity. Himalayan petroglyphs are found throughout Ladakh, extending from Lahaul-Spiti in the east and westward into the Karakoram and beyond, as far as Mongolia in the north and across the Pamir in Central Asia. Just as the formation of the mountains is chronicled in stone, so is the migration of Stone Age hunters. Their rock art is an eloquent record of arrival and discovery, of man’s successes and failures, as well as the host of creatures with whom we share these perilous heights.

Petroglyphs are the first field guides for Himalayan wildlife. Each species is carefully delineated. Wild yaks (Bos mutus) are hunted down by men on horseback, accompanied by packs of dogs that drive the shaggy cattle within range of an archer’s bow. A large bird with open wings appears to be an eagle or a vulture, perhaps a Himalayan griffon (Gyps himalayensis).The artists who etched these images understood the taxonomy of wild goats and sheep, classifying and cataloguing them on the rocks surrounding their campsites.

Admiring the petroglyphs, I wonder what purpose they served. Were these meant to signal the presence of particular animals at specific sites? Or were they boastful illustrations for heroic yarns of hunting prowess told around a campfire? I can imagine the glimmering light of smouldering dung kindled with juniper twigs. Silhouettes of the hunters’ hands provide a shadow puppetry of gestures describing the chase. Or were these ritual figures carved as prayers to ensure success and survival? The images evoke the chanting of shamans calling upon animal spirits for guidance and protection.

Petroglyphs are precursors of mane stones, the Buddhist engravings of prayers like Om Mane Padme Om (Hail the sacred jewel in the lotus) inscribed on rocks throughout the Himalaya and piled up in walls or cairns along pilgrimage routes. Tsewang Rigzen, my guide and companion in Ladakh, runs his fingers over the outline of a bharal, or blue sheep, tracing the double arch of its horns. A few centimetres away a spiral sunburst suggests a solar deity, or maybe it simply signifies another dawn. On some of the rocks are handprints, where the anonymous artists signed their work with impressions of an open palm.

Ladakh is where the prow of India ran aground on the beachhead of Central Asia. It is a land of stark contrasts and vacant spaces, where frozen lakes like Pangong Tso reflect the vastness of the sky while the sparse grasslands, desiccated earth and skeletal shapes of barren ridges convey a sense of deathly solitude. Walking across these high altitude deserts, I can feel the inner chill of loneliness that must have accompanied those Stone Age hunters who came here seven to ten millennia ago and scratched images of animals on the rocks. The landscape has changed little since then—dry, boulder-strewn wastes and sprawling glaciers out of which flow streams of meltwater that carve the earth into grooves and channels. The cartography of erosion defines the land more decisively than survey maps, creating natural boundaries and lines in the sand. The loose, friable soil is like unformed, unfired clay. Here at the western limits of the Himalaya, it feels as if the mountains are still taking shape, on the cusp of creation, as if Ladakh were a huge, primeval construction site.

Driving through the arid landscape along the Indus, a startling strip of bright green fields suddenly comes into view, bordered by a stand of poplars. Where a stream flows out of a gorge, someone has planted a crop of barley. Yet, it seems like a flash of spontaneous generation, the first brushstroke of life on a blank, brown canvas. On ahead, rounding another bend in the road, the opposite slope also seems to be clad in green, but a much darker iridescent shade. Again, it looks as if life were springing abruptly from the sterile soil but this time it is minerals that give the ridge its illusory colour. What appeared, at first glance, to be a fertile hillside is nothing more than bare green rock, devoid of life.

In another valley, more than 100 kilometres east of the Zanskar River, flows the Khyamar Chu, a small tributary that joins the Indus at Upshi. A short distance upstream from the confluence, Rigzen leads me across a flimsy bridge of willow boughs and along the opposite bank. A covey of chukar partridge scuttle up the slope and into the sheltering rocks above. We clamber over loose talus and stop to eat orange buckthorn berries ripening in the autumn sun. The sharp, acidic flavour catches at the back of my throat.

Earlier, from the motor road, on the opposite bank of the river, Rigzen had pointed out a single petroglyph, the shape of a lizard about 15 centimetres long. One of its descendants now crosses our path and darts into a crevice beneath a rock. A few steps ahead I see the lizard emerge again, watching us with a cold-blooded gaze. When we finally reach the petroglyph, the reptilian image is etched on the stone like a man-made fossil. All around us are the smooth shapes of dark boulders that rock artists favoured. The coppery hue is like a ceramicist’s glaze, vitrified in the furnace of Ladakh’s harsh climate and tinted by chemical reactions on the surface of the rock.

Scrambling down to get a closer look, I can see familiar shapes and figures. A dog has grabbed a wounded yak by the throat. Ibex scatter as a hunter shoots an arrow tipped with stone. Human figures surround a dying sheep. A series of symmetrical dots, like a spiral ellipsis, radiate from a scalloped depression on another boulder. Next to this is an image of an antelope fleeing a hunter on horseback, its legs like calipers with symmetrical horns converging above its head. The arrested movement in these images transcends the stillness of stone.

Petroglyphs convey ancient stories but there is no linear narrative or spatial perspective. Instead, the natural contours of the rock dictate the arrangement of shapes and forms. Trying to recognize a cluster of obscure figures, I ask Rigzen what these are and he directs me to the other side of the boulder, where I finally make out a herd of yak. No language appears on the rocks and only a few abstract symbols. A pentagon with what looks like a star at the centre appears to be a random scrawl—graffiti that bears no meaning beyond its own whimsical design.

Farther upstream, near a village called Lato, Rigzen stops at another site. Climbing up to a telltale outcropping of dark rocks, we find more petroglyphs. As I identify images of wild sheep, a pebble tumbles down the slope from above. Looking up, we see two animals crossing a landslide. It is an urial ewe and her lamb, their wool a dull cream colour against the brown slope—the same species that appears on the rock. In Ladakhi, the males are known as shapo and the females are called shamo. The two animals stop and look at me, just as I look up at them. We observe each other as if in a timeless frieze.

A short while later, I spot the rest of the herd grazing in a narrow valley above the Khyamar Chu. Hardly any grass grows on the bare slopes but there are a few sparse bushes on which the urial browse. Getting down from our vehicle, I approach them slowly, taking cover in a trench carved by run-off from a rare cloudburst years ago. Moving cautiously, I stalk the urial to within bowshot range, about 30 metres. They seem oblivious of my presence as I stand up slowly and focus my camera. In my mind’s eye, I picture myself as a Stone Age hunter, slotting an arrow and taking aim. At the barely audible whine of the zoom, one of the wild sheep raises her head and I can see small horns between her ears. After taking a dozen photographs, I turn my back on the urial. Immediately they spot me, dashing out of sight into the surrounding cliffs above.