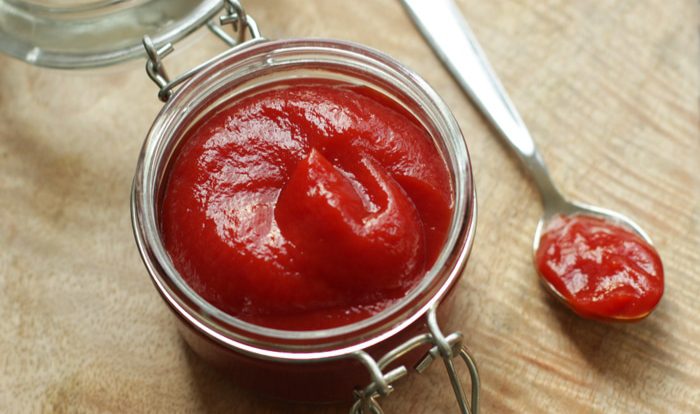 As a wise man with an ice-cream cone tattooed on his face once said, “If you don’t have the sauce, then you’re lost. But you can also get lost in the sauce.” We never really understood what that meant — until we discovered the bizarre history of ketchup. Now up is down, back is forward, and there’s nothing but ketchup as far as the mind’s eye can see. Just take this single fact, for starters: The first ketchup had nothing to do with tomatoes.

In the late 17th century, there wasn’t any such thing as ketchup. There were, however, European merchants, sailors, and military forces running rampant through the entire Asian continent. In Southeast Asia, it was the British who held the most sway. But when these British invaders started trickling home, they found themselves missing the distinctly savory-sweet tang of the food abroad. Specifically, they missed kê-tsiap, a thin, dark condiment that might have been either Cantonese in origin and meaning roughly “eggplant juice,” or a Malaysian version of a fermented fish sauce such as nam-pla. So they started trying to make some for themselves.
The only problem? They had no idea what was in it. So first, they butchered the name, and second, they started winging the recipe. Some varieties stuck with fishy ingredients such as oysters and anchovies, but other recipes called for walnuts, mushrooms, and various other vegetables you don’t normally associate with the bright tomato-red condiment. The first known recipe to actually include the tomatoes was published in 1812 by horticulturist James Mease. Not only did he call tomatoes “love apples,” but his recipe featured a multitude of spices, a splash of brandy, and no vinegar or sugar.

Doesn’t sound like something you’d put on a burger, does it? That’s because it wasn’t. Instead, it was meant as an additive to soups, other sauces, and to ladle over fish. Of course, it seems like pretty much anything could have been called “ketchup” in those days — it was used to describe everything from Indonesian soy sauce to tamarind chutneys to vinegary pastes of unripe nuts. If you had a wall of ketchups like that to choose from these days, it might feel a little bit like Russian (dressing) roulette. Fortunately, industrialization came in to codify ketchup and cement it in condiment history.

With a new, mechanized means of rolling out identical ketchup bottles to stock the world’s pantries, the condiment became a staple of United States dinner tables. But now, the issue was that tomatoes don’t grow all year round, so even though the stuff stayed shelf-stable for up to a year, you can only sell a single batch for so long. Many manufacturers circumvented this unfortunate truth by loading their sauce with preservatives like coal tar and sodium benzoate. And that didn’t sit right with the ever-more health-conscious American public.

In 1905, ketchup changed for good, forever. Henry J. Heinz was convinced that if he could make a preservative-free ketchup that would last in the icebox, he could tap into an untapped desire. He did it by using full, ripe tomatoes instead of scraps from the cannery floor, and increasing the vinegar content to never-bef0re-seen levels. Once a door-to-door horseradish salesman, he transformed the foodscape overnight and launched a culinary empire.

In 1896, the Heinz company was packaging more than 60 different products, including some wonderfully 1890s-sounding dishes like plum pudding, India relish, euchred pickle, currant jelly, and celery soup. That was also the year that Heinz, riding a train in New York City, spotted an advertisement for a shoe store with “21 styles” of shoes. He was smitten with the specificity of the number, and after some thinking, settled on “57” as the perfect number to describe how many food products his company produced. So no, there have never been 57 varieties of ketchup at Heinz — but they’ve been producing far more than 57 varieties for more than 100 years.