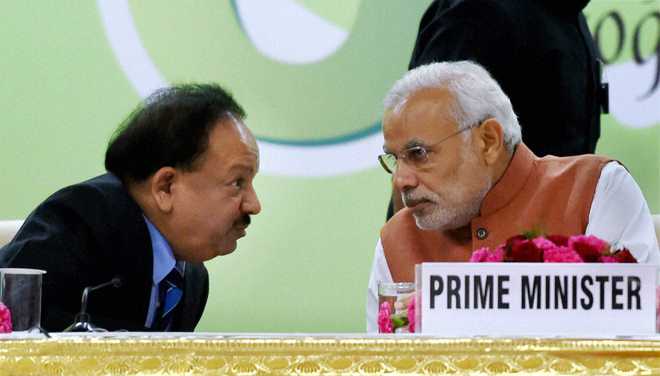 The Parliamentary standing committee on health and family welfare on 21st November 2020 presented a report to the Chairman of Rajya Sabha, Hon’ble Vice President Shri Venkaiah Naidu on the outbreak of pandemic of covid-19 and its management. This report on the management of the pandemic by the Modi Government warned the government of a second wave very well in advance in November which was good 5 months ago.

Still the country especially the nation’s capital is gasping for its breath. The report was tabled on both the houses on 2nd February itself and still, the government handsomely failed in all its tasks to keep the pandemic in check. The report highlighted the use of Oxygen in hospitals as large as 3000 Metric tons on two days i.e. 24th and 25th of September. The committee also pointed out that India has a production capacity of 6900 Metric Tons, where in the first wave Indian hospitals utilised 1000 metric tons of oxygen on a daily basis. The committee strongly advised the need for a large inventory from cutting down industrial usage and ensure the prices of oxygen are controlled by the government. The committee also explained in the report that the usage of oxygen will ramp up to an unprecedented amount and the government must boost the daily production capacity from 6900 Metric Tons.

The Government of India instead of stockpiling oxygen, important medicines and vials, exported the same. The exports of oxygen saw a humongous 700% rise than last year. Same was the case with remdesivir vials and so was the case with Vaccines too. The Modi government exported a whopping 6.45 Crore vials of Vaccines from January to March in just three months. India on the other hand managed to fully vaccinate only 93 lakh people till 31st of March a meagre 0.7% of the population.

This is after India is manufacturing the highest number of vaccines worldwide and is also on a contractual basis providing the various worldwide government with the vaccines. When the manufacturing companies were themselves fulfilling their commitment to supply vaccines what was the need for Modi to be so benevolent and give out free vaccines to as many as 80 countries in FREE as gifts. In a major embarrassment to the government, the Railways minister commented in early April that the oxygen usage by patients was unnecessary and too much than required. When the oxygen and vaccine crisis started to evolve first in Maharashtra, CM Shri Uddhav Thackeray called upon the PMO to speak to PM. He was reverted that the PM is busy in his political campaign in West Bengal and can only speak once he has returned. Chattisgarh CM Shri Bhupesh Baghel on the other hand started to ramp up oxygen plants from 7th April itself without waiting for the negligent Government of India. Chattisgarh ramped up its capacity to 386 Metric Tons where its requirement is just 150 Metric Tons. This timely action by Bhupesh Baghel saved innumerable lives in Chhattisgarh.

The standing committee advised the government to cap and limit the prices of oxygen cylinders as well as medicines and injections for the treatment of COVID-19 for time being so that the hospitals and plants can stock large quantities, but Modi and his Health minister were adamant to discard this and declare win again and again over COVID as early as from January 21. Where Congress leader and MP Shri Rahul Gandhi was warning the government even before anyone in the government system was aware of the problems that were about to come, the health minister, the finance minister, the Railway minister, the defence minister and as far as the troll minister herself Smt. Smriti Irani trolled and ridiculed Rahul Gandhi and his timely advice and suggestions. The government of India, The Prime Minister and the Health Minister should be held accountable for their disastrous management and negligence of the pandemic. The Congress has been criticising the handling of the pandemic by the Modi government and party chief Sonia Gandhi, at a recent meeting with Chief Ministers of Congress-ruled/allied States, accused the Centre of mismanagement. “The Modi government has mismanaged the situation — exported vaccine and allowed a shortage to be created in India. Mass gatherings for elections and religious events have accelerated COVID for which all of us are responsible to some extent. We need to accept this responsibility and keep the interest of the nation above our own,” Mrs Gandhi told her party colleagues at the virtual meet on April 10.

Modi has gone from hero to minnow in fighting Covid-19 in the eyes of the world press as daily infections have soared to successive new records. Headlines like: “Modi flounders in India’s gigantic second wave,” in The Times, London, have been typical of the coverage that the Prime Minister has been receiving as the daily count of new Covid cases has barrelled past 300,000. “The system has collapsed: India’s descent into Covid hell,” said an equally blistering headline in The Guardian, which led its main story with a photo of flames soaring high in a crematorium. The newspaper added: “Many falsely believed that the country had defeated Covid. Now, hospitals are running out of oxygen and bodies are stacking up in morgues.” It also talks about Modi, mask-less, at West Bengal election rallies attended by hundreds of thousands of voters, also not wearing masks, declaring that, “In all directions, I see huge crowds of people….I have never seen such crowds at a rally.” The Washington Street Journal also blames the early hubris that the virus had been defeated for the rate of low genome sequencing, saying: “Many testing facilities, which would provide positive Covid-19 samples to the labs, were dismantled after Delhi prematurely declared victory over the pandemic.”

In the last few days, the international press has turned special attention to the countrywide oxygen shortages. The New York Times said: “As supplies of hospital beds, oxygen and vaccines run low, criticism of the government is building.” The media paints Modi as having been lulled into complacency over having apparently kept infections to a minimum in the first wave. It will take a giant PR operation, which he surely will undertake to turn around the global perception that Modi has failed badly in failing to subdue the second wave.

For Modi what matters is his Public Image and his PR.