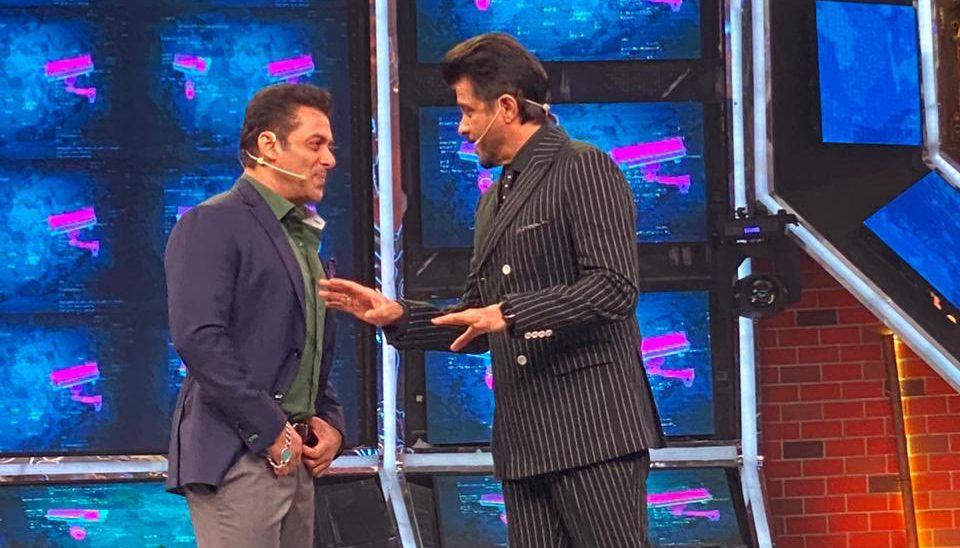 The Bigg Boss 13 Weekend Ka Vaar ,Salman Khan’s episode is expected to be a high-voltage drama. After bringing a lot of new twist and turns, Salman Khan will discuss the contestants’ week’s performance and a contestant will be eliminated on the basis of the votes. Indeed, it will be a deciding episode paving the way for the fate of the contestants. Bigg Boss 13 is known for bringing entertaining instances into the show to hook the viewers for a long time.

High TRP is a proof the viewers can’t get enough of the show’s drama. But what is interesting to note is the makers are not at all leaving no stone unturned to entertain its regular viewers. In this Weekend Ka Vaar, the Pagalpanti teams will visit the sets of the Weekend ka Vaar to promote their show on Salman Khan’s Bigg Boss 13.

Anil Kapoor recently took to Twitter to share some BTS photos from the Bigg Boss shoot with Salman Khan. He wrote that WiFi Bhai is in deep conversation with Salman Khan Bhai.

In the photos, Anil Kapoor and Salman Khan, who had shared silver screen together can be seen talking for long hours.

It’s not possible to ascertain what they are talking but probably if go by the pictures, it can be said that both are lost in their talks. Photos have gone viral on social media. Crazy fans can’t get enough of these photos.

Sources also reveal that the leading actresses of the Pagalpanti, Kriti Kharbanda and Urvashi Rautela brought a tiffin on the stage for Salman Khan. Salman Khan is known to be a foodie and will be answering a few quirky questions. Also, it is said that the director Anees Bazmee will be present to meet Salman Khan to promote his upcoming multi-starrer.