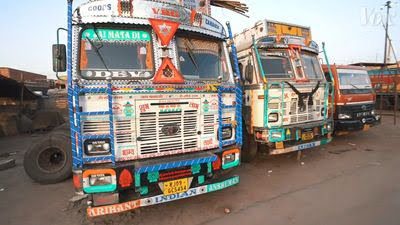 In yet another case of drivers paying hefty penalties for breaking traffic rules under the Motor Vehicles Act, amendments to which came into effect from this month, a truck driver had to cough out as much as ₹1.41 lakh after being caught for overloading in Delhi.

The trucker from Rajasthan was caught by the enforcement wing of Delhi transport department on Thursday after which the driver paid the penalty of ₹1,41,700, at Rohini court on Monday, according to a PTI report.

After implementation of amended Motor Vehicles Act, the penalty for overloading of goods carriers has been hiked to ₹20,000 with₹2,000 for each additional tonne, the official said.

To improve road safety, the transport ministry has increased the fine for all traffic-related offences. For example, riding a bike without helmet leads to a penalty of ₹1,000 along with a suspension of licence for three months.

Driving under the influence of alcohol or not giving way to an ambulance or fire brigade may cost one as much as ₹10,000, imprisonment, or both.

As a result of the spike in fine rates, several cases are being reported across India where motorists end up paying huge fine for breaking traffic rules.

In Gurgaon, an auto driver was handed over a challan of ₹32,500 after he was found to have jumped red light signal and in Bhubaneswar a drunk autorickshaw driver was fined ₹47,500.